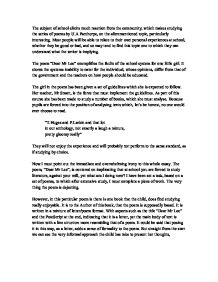 The subject of school elicits much reaction from the community, which makes studying the series of poems by U.A Fanthorpe, on the aforementioned topic, particularly interesting. Most people will be able to relate to their own personal experiences at school, whether they be good or bad, and so may tend to find this topic one to which they can understand what the writer is implying. The poem "Dear Mr Lee" exemplifies the faults of the school system for one little girl. It shows the systems inability to cater for the individual, whose opinions, differ from that of the government and the teachers on how people should be educated. The girl in the poem has been given a set of guidelines which she is expected to follow. Her teacher, Mr Smart, is the force that must implement the guidelines. As part of this course she has been made to study a number of books, which she must analyse. Because pupils are forced into the position of analysing texts which, let's be honest, no one would ever choose to read. "T.Huges and P.Larkin and that lot in our anthology, not exactly a laugh a minute, pretty gloomy really" They will not enjoy the experience and will probably not perform to the same standard, as if studying by choice. ...read more.

This is a terrible relationship, certainly not one that any child should have with their teacher. They should be comforted and encouraged, not put down. Unfortunately, it seems that this is happening a lot in our schools, Fanthorpe has certainly picked up on this, not only in this poem, but also in "Reports" where the writer has commented on the relationship of teacher and student. 'Reports' is essentially about what the teachers think of the students and how this differs from how they portray them in the reports. It seems that in the poem we have the voices of two teachers. One seems to be a more experienced teacher than the other, a veteran of their trade. The more experienced teacher is explaining to the other teacher how to write the student's reports in a way that will not cause too much of a stir. They explain how a teacher should use generalisations and clich�s to hide the truth without blatant lying. Also, to be more polite they use this euphemistic language. The clich�s, like the voice of the examiner in "Dear Mr Lee", are all in italics. Again this highlights them, and adds to the idea of the over-use of the phrases. Fanthorpe implies that the teachers try to make the reports that they give to the students as vague and impersonal as possible. Essentially the reports they give could apply to any student. ...read more.

"the little eyes And the two long legs for walking,". As in "Dear Mr Lee" the child has been let down by the teacher. Although, possibly some people may be envious if the child in "Half-past Two" as he waits "Out of reach of all the timefors". There is certainly a general criticism of the education system in all these three poems. In particular they seem to highlight the systems inability to cater for students singularly, rather than as a whole class. At the end of "Dear Mr Lee" there is a 'P.S.', this seems to be a sad apology which explains that essentially, it was the school that let the pupil down. "please don't feel guilty for me failing the exam, it wasn't your fault, it was mine, and Shakespeare's, and Maybe Mr Smart's. In each of the poems U.A Fanthorpe has focused in on one person, and through them has relayed inadequacies in the education system.. The poet has voiced her negative feelings very strongly throughout her poems to in order to highlight flaws in the system. The poems are written with a certain personal feeling of someone who has actually 'been there'. These may be her opinions as an ex-teacher or, more likely, from remembered experiences when she herself was a girl studying at school. From whichever point of view not all her experiences of school were positive and she has highlighted some of her frustrations in the education system. ...Many of which are still evident at Simon Balle school today ...read more.