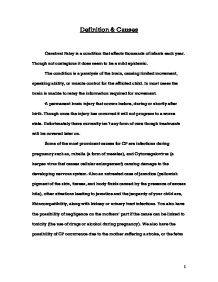 Definition & Causes Cerebral Palsy is a condition that affects thousands of infants each year. Though not contagious it does seem to be a mild epidemic. The condition is a paralysis of the brain, causing limited movement, speaking ability, or muscle control for the afflicted child. In most cases the brain is unable to relay the information required for movement. A permanent brain injury that occurs before, during or shortly after birth. Though once the injury has occurred it will not progress to a worse state. Unfortunately there currently isn't any form of cure though treatments will be covered later on. Some of the most prominent causes for CP are infections during pregnancy such as, rubella (a form of measles), and Cytomegalovirus (a herpes virus that causes cellular enlargement) causing damage to the developing nervous system. Also an untreated case of jaundice (yellowish pigment of the skin, tissues, and body fluids caused by the presence of excess bile), other situations leading to jaundice and the jeopardy of your child are, Rhincompatibility, along with kidney or urinary tract infections. You also have the possibility of negligence on the mothers' part if the cause can be linked to toxicity (the use of drugs or alcohol during pregnancy). We also have the possibility of CP occurrence due to the mother suffering a stroke, or the fetus not receiving enough oxygen at the time of birth (which is a major reason for lamaze breathing techniques during birth). (cpf) Types CP has three categories of affliction, Ataxic CP occurs when the muscles are too weak. Children will be shaky, unsteady and have poor balance, approximately 10% of CP suffers have this form. ...read more.

Another problem may appear in the lack of muscle tone by which even if a child did recognize the need they wouldn't have the ability to produce enough pressure needed to help with elimination. (Geralis p71-71) Treatments Although cerebral palsy is incurable there are steps a patient can take to make the situation more productive. While each case is different there are several possible members to each treatment team, such as your basic physician or team captain, an individual trained in treatments for developmentally challenged youths. He will point you in the right direction. Often to an orthopedist, a doctor specializing in bone, muscle and tissue issues, this will also work hand in hand with a physical therapist. Another option a family has is with a speech-language therapist, who helps a child learn to speak more clearly. A patient may also need the added guidance from a psychologist or social worker to help a family get in touch with community resources, or to help them coup with the unique situation. (cpf) Physical and Behavioral Therapy Therapy, whether for movement, speech, or practical tasks, is an integral part of cerebral palsy treatment. The skills a 2-year-old needs to explore the world are very different from those of a child, teen or adult, and therapy should be tailored to reflect these changing demands. Physical therapy usually begins in the first few years of life. These programs use specific sets of exercises to work toward two important goals: Preventing the deterioration of muscles that can happen from lack of use and avoiding contracture, in which muscles become fixed in a rigid, abnormal position. A third goal of some physical therapy programs is to improve the child's motor development. ...read more.

He started to sign his initials C.B., then moved on to his name and gradually began to write. He also found and developed a talent for painting, again using his left foot and when he was 12 years old won a Sunday Independent children's painting competition. (Brown) His autobiography, My Left Foot was later expanded into the novel Down All The Days, and became an international best seller, being translated into fourteen languages. There followed other novels including A Shadow on Summer. He also published a number of poetry collections including Come Softly to My Wake, published in America as Poems of Christy Brown; Background Music: Poems; Of Snails And Skylarks; and Wild Grow the Lilies. He settled with his wife Mary Carr, in Ballyheigue, Co Kerry, and also in Parbrook, Somerset, UK, where he died in 1981. (Brown) Dan Keplinger Dan was born on January 19, 1973 in Baltimore, Maryland. He was born with cerebral palsy. At the age of 18 months, he enrolled in Delray School run by United Cerebral Palsy of Central Maryland. It was here that he began his education and therapies. When he turned 6, he enrolled at Ridge; a level five special education school. At age 16 Dan began attending Parkville high where he was completely main- streamed by his sophomore year. Dan graduated from Parkville in 1993 and went to Towson University the following fall. He graduated in May of 1998 with a B.S. in Mass Communications. He returned to Towson in the fall of 2000 for a second B.S. in Art. Through school Dan participated in many Art Department shows. In addition, his work was shown all across Maryland sponsored by Very Special Arts. In 1993 he was a featured artist in a show at the University of Boston, and he had his first solo show in May 2000. (Keplinger) ?? ?? ?? ?? 1 ...read more.