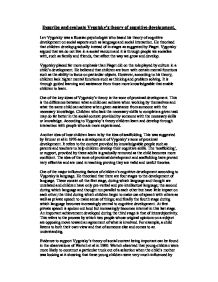 Describe and evaluate Vygotsky's theory of cognitive development. Lev Vygotsky was a Russian psychologist who based his theory of cognitive development on social aspects such as language and social interaction. He theorised that children develop gradually instead of in stages as suggested by Piaget. Vygotsky argued that we do not live in a social vacuum and it is through people we socialise with, such as family and friends, that affect the way we grow and develop. Vygotsky placed far more emphasis than Piaget did on the role played by culture in a child's development. He believed that children are born with certain mental functions such as the ability to focus on particular objects. However, according to his theory, children lack higher mental functions such as thinking and problem solving. It is through guided learning and assistance from those more knowledgeable that enable children to learn. ...read more.

The idea of the zone of proximal development and scaffolding have proved very effective and are used in teaching proving they are valid and useful theories. One of the major influencing factors of children's cognitive development according to Vygotsky is language. He theorised that there are four stages to the development of language. These consist of: the first stage, during which language and thought are unrelated and children have only pre-verbal and pre-intellectual language; the second during which language and thought run parallel to each other but have little impact on each other; the third during which children begin to make use of speech with others as well as private speech to make sense of things; and finally the fourth stage during which language becomes increasingly central to cognitive development. At first private speech is spoken out loud but increasingly becomes internal in this last stage. ...read more.

Behrend et al found that children who made use of inner speech (measured by visible lip movements and whispering) did better in tasks than those that did not. However, Vygotsky's theory has been criticised for placing too much emphasis on the importance of social interaction without taking into account the part that motivation and interest can play in a child's cognitive development. Also, he does not specify which type of social interaction is best or take into consideration what the effect would be of someone who, in a social situation, refuses to compromise their position or point of view. Social interaction in these circumstances would not be beneficial for the child. Vygotsky emphasised the importance of language and social interaction in a child's cognitive development. Vygotsky also, unlike Piaget, recognised the importance that different cultural upbringing can play in a child's cognitive development claiming that tools are specific to different cultures. According to his theory, it is through social interaction with those we have regular social contact with that we learn. ...read more.