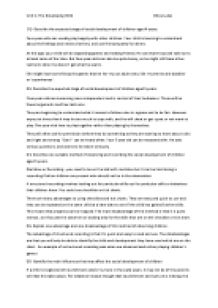 ﻿Unit 2- The Developing Child Chloe Lukes D1- Describe the expected stage of social development of children aged 4 years. Four-year-olds can usually play happily with other children. Your child is learning to understand about the feelings and needs of others, and can feel sympathy for others. At this age, your child will be organising games and making friends. He can share toys and take turns at least some of the time. But four-year-olds can also be quite bossy, so he might still have a few tantrums when he doesn?t get what he wants. She might have some favourite games that let her try out adult roles, like ?mummies and daddies? or ?superheroes?. D2- Describe the expected stage of social development of children aged 5 years. Fiver year olds are becoming more independent and in control of their behaviour. There will be fewer arguments and few tantrums. They are beginning to understand what it means to follow rules in a game and to be fair. However expect at times that it may be too much to cope with, and he will cheat or get upset or not want to play. Five year olds love to play together rather than playing by themselves. They will often ask for permission before they do something as they are starting to learn about rules and right and wrong. ?Can I? can be heard often. Your 5 year old can be reasoned with. ...read more.

being trained * Becoming self aware * Able to be cared for by others * Going to nursery * Going to school * Developing new skills. Other transitions that some of the children in your care may experience are: * A new baby- A new baby joining the family would cause the child to feel jealous and upset as before all the attention would have been on the child and now the attention is on the new baby. * Violence/abuse- A child witnessing violence/abuse could cause a child to use violence/abuse on other children they come in contact with. * Parents divorcing/step parent/new partner * A serious illness/accident/death in the family-A young child witnessing parents crying from a death in the family could affect the child as the child might start to cry constantly. * Unexpected change of school * Moving house. It is these early transitions, and how we cope with them that will have the greatest effect on the rest of our emotional development, and on our ability to cope with life?s challenges. B1- Describe ways the practiconer can support children through transitions. 1) Allow the child to make several visits to the new setting to get familiar with their new environment/surroundings. 2) When child goes to for the visits - to ensure there is at least one main adult the child builds an attachment too. 3) Reading books on topics, talking about it E.g. Starting school 4) Arranging a visit to the new setting. 5) Involving children in preparation e.g. ...read more.

Children learn from routine and practice and derive security and confidence from knowing what's expected of them. A good care routine will also provide a lot of time for interactions between carers and children, this is especially important, as a strong attachment are vital in a child's first years of development. Routines help a child build confidence in themselves, when child has a routine established and knows what is expected out of them and how long they have to get the job done it will manage their time and behaviour. Routines are an important part of any child's life because they help children develop a sense of stability and order. When things are predictable, when the same things happen in a certain order at a certain time of day, children are reassured that the world is a safe place in which they can learn to make their way. Routines are important as a child can become unsettled and children can become strong and independent from a base of loving and secure relationships with parents and key workers. A routine provides a predictable pattern to each session the body tends to like routine. An example is you get hungry at certain times of the day and so on. It helps children settle into the nursery, they feel as if they belong there and after a few weeks, they'll roughly know what they will be doing after playtime, when snack time is, etc. As for play, once the routine has been set, i.e., waiting in turn until it's their turn to go on the slide, the children will quickly adjust to the new routine. ...read more.