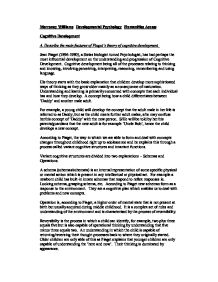 Describe the main features of Piaget's theory of cognitive development.

Merroney Williams Developmental Psychology Humanities Access Cognitive Development A. Describe the main features of Piaget's theory of cognitive development. Jean Piaget (1896-1980), a Swiss biologist turned Psychologist, has had perhaps the most influential development on the understanding and progression of Cognitive Development. Cognitive development being all of the processes relating to thinking and knowing, involving perceiving, interpreting, reasoning, remembering and using language. His theory starts with the basic explanation that children develop more sophisticated ways of thinking as they grow older mainly as a consequence of maturation. Understanding and learning is primarily concerned with concepts that each individual has and how they develop. A concept being how a child differentiates between 'Daddy' and another male adult. For example, a young child will develop the concept that the adult male in her life is referred to as Daddy, but as the child meets further adult males, s/he may confuse her/his concept of 'Daddy' with the new person. S/He will be told by her/his parents/guardians that the new adult is for example 'Uncle Bob', hence the child develops a new concept. According to Piaget, the way in which we are able to form and deal with concepts changes throughout childhood right up to adolescence and he explains this through a process called variant cognitive structures and invariant functions. Variant cognitive structures are divided into two explanations - Schemas and Operations. A schema (schemas/schemata) is an internal representation of some specific physical or mental action which is present in any intellectual or physical act. ...read more.

Their thinking is no longer dominated by one feature of the situation. According to the findings of Piaget the understanding of conservation takes place in a definite order; conservation of number is capable by age six to seven and conservation of volume is capable at eleven and twelve years. During the Concrete Operations stage, the child is less egocentric and is able to handle concepts such as classification, the ability to group objects together logically in terms of their common characteristics and seriation, the ability to arrange things in order. The child can manipulate and experiment with real objects in order to solve problems logically but still has difficulty dealing with verbal problems. In Piaget's fourth and final stage, Formal Operations, which he states occurs in children age eleven and upwards, Piaget claims that the child now has the ability to reason in the abstract without having to rely on concrete objects or events. S/He is able to solve problems systematically testing out propositions and consider their interrelatedness. Piaget is clear in that he believes that all of these stages of cognitive development occur at around the ages he has specified, although he makes exceptions for factors such as intelligence, cultural background and socio-economic factors. B. To what extent are Piaget's findings supported by other Psychological studies? Piaget has been supported and criticised by many psychologists, mostly for his methodology. The primary criticisms lie in that Piaget used the clinical interview method but had no set questions nor standard method of presentation and this was left open to interpretation that the children could have been 'led' to their answers. ...read more.

Vygotsky claims that language is a social phenomena, as is thinking a cognitive phenomena. Piaget does not believe that the child can go onto the next cognitive stage unless they are maturationally ready, whereas Vygotsky claims that using a childs zone of proximal development can help the child to mature cognitively faster. In conclusion, although both Psychologists put forward theory's which can be applied and agreed with regarding cognitive development of children. Both theory's claim that cognitive development cannot be progressed without an external factor stimulating factor. Does development comes from a series of inbuilt stages which are completed via interactions within our environment, or is development stimulated from from external factors before we are necessarily cognitively ready? These theories applied to the education of children have both been proven to work. It is apparent that within schools, if a stimulating environment is provided, children have shown to perform better and progress at faster rates with comparison to the previous methods of teaching - via rote in dull conservative class rooms. Class rooms that are bright and pasted with letters, words, pictures and photo's, seating arrangements that encourage children to socialise and interact within themselves and tasks and lessons that are not just necessarily rote learning but involve play and experimentation. This is the modern day class room which includes aspects of both theories put forward by Piaget, Vygotsky and other psychologist alike. Conclusively, the evidence suggests that both theories can be applied to cognitive child development and that the decision as to which one is right or wrong lies somewhere between the two. ...read more.