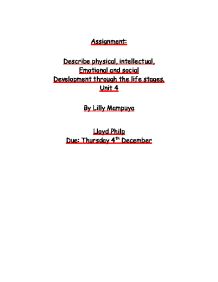 describe the pies development through the life stages

Assignment: Describe physical, intellectual, Emotional and social Development through the life stages. Unit 4 By Lilly Mampuya Lloyd Philp Due: Thursday 4th December Describe physical, intellectual, Emotional and social development through the life stages. Physical development: The physical development of a human being is unique because of all of the visible changes that every human being goes through. Physical growth results from a continuous and complex interplay between genetics and environment (nature vs. nurture). Conception- Pregnancy- A fertilised egg is called a zygote. It divides quickly to become a vacant ball of unspecialised stem cells called an embryo. In order to persist on growing and commence the process of separation, the embryo needs to access a life support system. Pregnancy begins when the embryo implants or embeds it self into the lining of the uterus wall. Week 1-2: Passage to the uterus The egg is fertilised in one of the fallopian tubes and is carried into the uterus. Week 3-4: Embryo The embryo becomes pear shaped; the embryo becomes C-shaped and a tail is visible. The umbilical cord forms and the forebrain enlarge. Week 5: Internal organs All the internal organs have begun to structure by the fifth week. During this significant stage of development, the embryo is defenceless to dangerous substance consumed by the mother (such as alcohol and drugs), which may cause defects. Week 6-8: Recognisable Eyes are able to be seen the mouth, nose and ears are forming. The limbs grow swiftly from tiny buds. The face is more 'human', the head is more upright, and the tail has gone. Limbs become jointed. Fingers and toes become visible. Week 10: Size The foetus is now approximately 60-65mm in length. Intestine are now in the abdomen; early fingernail development. (External genitalia are still not distinguishable as male or female) Week 15: Limbs The ears are still low, but very close to their authoritative position. ...read more.

By age 18, boys have about three quarters inch of growth remaining and girls have slightly less. Physical change in Boys In boys, the first changes in sexual characteristics are enlargement of the scrotum and testes, followed by lengthening of the penis. Internally, the seminal vesicles and prostate gland enlarge. Next, pubic hair appears. Hair grows on the face and in the underarms about 2 years after it appears in the pubic area. The first ejaculation usually occurs between the ages of 12 and 14, about 1 year after the penis begins to lengthen. Breast enlargement on one side or both is common in young adolescent boys and usually disappears within a year. Physical changes in girls In the majority of girls, the first visible sign of sexual maturation is breast maturing, closely followed by the growth spurt. The first menstrual period commonly starts about 2 years after the breasts begin to enlarge. Height increases most before menstruation begins. Soon afterward, pubic and underarm hair appears, however some girls don't have any pubic/hair growing until they have reached a certain age, I say this because I have a friend who hasn't got any growth of hair on her underarms, arms and legs; she's now 17 and they are now starting to grow. This shows that girls can grow at different paces. Adulthood- Most adults reach their full height late teens or early twenties, their peak strength in their mid-twenties and their maximum weight in their middle years. Hearing and vision are at their peak around the age of 20, as is reproductive capacity for women. Most adults are highly active between the ages of 16 and 30. Older adults tend to lose some strength and speed with age, even though these changes are often overlooked outside reasonable sport; and older adult could easily accomplish an individual peak of fitness at 40 or 50 if they take up life. ...read more.

* This is a time of testing limits. Being able to count on certain consequences for their actions is important for the toddler's sense of where they fit in the world. The two years old becomes aware of him/her self as a separate person. * The interest in peers increases and we see both cooperative and aggressive behaviors displayed. * This is a time to learn that there are right and wrong ways of getting what you want. * Routine and stability are important. Children below about 2 years have few emotion words to describe their feelings. * Two year olds begin to understand the connection between facial expressions and emotions. * Parents can help young children by talking about their own feelings in certain situations. Between 2 - 3 years children begin to talk about their feelings. Being able to cope with frustration and having to wait first appears at around 24 months. As children get older they are more able to control their own behaviour. Preschoolers 3 - 5 yrs This age sees children develop social skills, understand feelings and grow in their understanding of ideas, time, relationships and language. This is a time for the testing of new abilities in new settings. Imaginary Friends. As many as 1 in 4 preschool aged children have imaginary friends. Imaginary friends may be clever and may do all the things that the child might wish to do. The imaginary friend may be one that is less able than the child, making it necessary for the child to care for this friend. This also explains why children of this age are attracted to "superhero" play and love dinosaurs. They are big, powerful and masters of their world. Imaginary companions usually disappear when children go to school. At this age comes a sense of humour and the ability to show empathy. For the first time a child can understand that the same event can cause different feelings in different people (e.g. the winner of a race feels happy while the loser feels sad). A major challenge for this age is developing friendships with other children. ...read more.