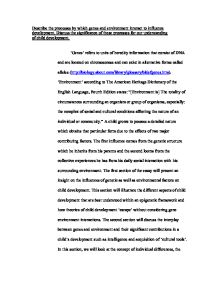 Describe the processes by which genes and environment interact to influencedevelopment. Discuss the significance of these processes for our understandingof child development.

Describe the processes by which genes and environment interact to influence development. Discuss the significance of these processes for our understanding of child development. 'Genes' refers to units of heredity information that consist of DNA and are located on chromosomes and can exist in alternative forms called alleles (http://biology.about.com/library/glossary/bldefgenes.htm). 'Environment' according to The American Heritage Dictionary of the English Language, Fourth Edition states: "[Environment is] The totality of circumstances surrounding an organism or group of organisms, especially: the complex of social and cultural conditions affecting the nature of an individual or community." A child grows to possess a detailed nature which obtains that particular form due to the effects of two major contributing factors. The first influence comes from the genetic structure which he inherits from his parents and the second looms from the collective experiences he has from his daily social interaction with his surrounding environment. The first section of the essay will present an insight on the influences of genetic as well as environmental factors on child development. This section will illustrate the different aspects of child development that are best understood within an epigenetic framework and how theories of child development 'escape' without considering gene environment interactions. The second section will discuss the interplay between genes and environment and their significant contributions in a child's development such as intelligence and acquisition of 'cultural tools'. In this section, we will look at the concept of individual differences, the importance of learning their existence and how biological processes affect individuality through the study of the transactional model. ...read more.

In this theory, environmental inputs have insignificant influence on the course and endpoint of development. The reason for such inclination towards genetic programming is that evidence for its existence in physical structures and behavioral characteristics in non-human animals is very strong. The human primary and secondary sexual characteristics seems to abide to the sequence of the genetic clock. Some behaviours which occur in the human infant are not caused by external stimulation. The internally caused actions are crying, stretching, sneezing, chewing, and smiling. At the time of birth, certain specific responses to external stimulation can occur. These are called reflexes. When the bottom of the baby's foot is scratched by the fingers, the toes of the baby are extended. This is called the Babinski reflex. Thus, the theory of genetic programming 'escape' without considering gene environment interactions as to the proponents, the role of environment in physical development of an infant is of insignificant value. Though there is little evidence for genetic programs to exist in the sphere of psychological development, the theory of Nativism by Chomsky argued that for the correlation between physical and mental growth of an infant is of a close one. His argument was that the experiences an infant has from his external surrounding (physical environment) is too bland to elucidate the very complexity of human mental psychological characteristics. Gardner's Multiple Intelligences' theory (1983, cited by Richardson, 2004) suggested that the development of intelligence involves the developmental growth of innate 'computational systems' in the brain which progress according to biological timetable. ...read more.

For example, correlation between scores of monozygotic twins reared together is higher (approximately .85) than correlations of dizygotic twins and less closely related siblings (Plomin & Petrill, 1997). Environment, too, includes a broad array of effects on intelligence; some influence whole populations while others contribute to individual differences. These influences include biological as well as social and cultural factors. A biological factor such as prolonged malnutrition during childhood has negative long-term intellectual effects. Exposure to lead can have a negative effect on intelligence: Neisser et al. (1996) administered IQ tests to children with high blood lead levels throughout childhood, and found they scored substantially lower. Social and cultural aspects of environment may influence intelligence. Schools promote the development of intellectual skills such as systematic problem-solving, abstract thinking, and categorization; children who attend regularly may be expected to benefit more than those who attend sporadically. In Scarr and Weinberg's study (1983) of adoptive and biologically related families with children between 16 and 22 years of age, they found environment more powerful in influencing IQ level in the young child than the young adult. They argue that better schooling, nutrition, health care and psychological services can raise the level of intellectual development. In conclusion, the developing child is an active confluence between genetic and environmental influences and represents a centre of organization and creative potential of new response functions for his development in his own right. A child is capable in inventing new potential dimension for development free from the clutches of pre-determinations in either environments or genes. ____________________________________________________________ (2298 words) ...read more.