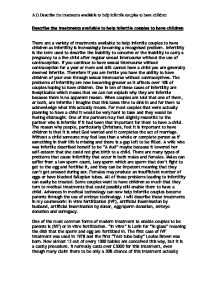 Describe the treatments available to help infertile couples to have children

Describe the treatments available to help infertile couples to have children There are a variety of treatments available to help infertile couples to have children as infertility is increasingly becoming a recognised problem. Infertility is the term used to describe the inability to conceive or the inability to carry a pregnancy to a live child after regular sexual intercourse without the use of contraception. If you continue to have sexual intercourse without contraception for a year or more and still cannot have a child you are generally deemed infertile. Therefore if you are fertile you have the ability to have children of your own through sexual intercourse without contraceptives. The problems of infertility are now becoming greater as it affects over 10% of couples hoping to have children. One in ten of these cases of infertility are inexplicable which means that we can not explain why they are infertile because there is no apparent reason. When couples are told that one of them, or both, are infertile I imagine that this takes time to sink in and for them to acknowledge what this actually means. For most couples that were actually planning to have a child it would be very hard to take and they would be feeling distraught. ...read more.

Now almost 12 out of every 1000 babies are conceived this way, but it is a costly procedure. It normally costs over �3000 for this treatment, even though many claim there to be only a 50% chance of this treatment actually working. The mother's eggs and the father's sperm are collected by doctors who fertilize the eggs into zygotes in a petri-dish in a laboratory (which led to the term "test tube baby".) The process involves mechanically removing the woman's egg from the womb placing it with the mans sperm It is hoped that in this dish the sperm fertilizes the egg and an embryo is formed. This will then be mechanically implanted back into the woman's uterus and eventually lead her to give birth to this child. Usually several eggs are implanted at once, as this method has a low success rate. Most couples do not become pregnant on the first attempt, though with repeated (though expensive) attempts, many parents have had success with this method. (AID) or Artificial insemination by donor is the treatment that raises amounts of moral dilemmas as the child's mother or father will be anonymous and this is not fair on the child. ...read more.

The Surrogacy Arrangements Act 1985 enforced this and also made it illegal for anyone to advertise surrogacy or to pay an agency to make a surrogacy arrangement. All of these treatments are legislated, supervised and regulated by the Human Fertilisation and Embryology Authority. There are, however, arguments about the morality of these treatments. People from a religious background may feel that doctors are taking on the role of God by creating life when this is God's task. Some will find it morally wrong that the child born from donated sperm or donated egg will not know its biological parents. There will always be religious disputes on these treatments because of what it does to the worth of human life. However there are those who would regard these treatments as a miracle as it enabled them to become parents. Those couples who were previously "Suspended in childlessness" can now feel a "Sense of the future". In no way did they feel it was there own fault or that they were "Tampering with nature." People truly feel that they have been blessed by God with a child finally and are obviously delighted that these forms of treatments have been made available to them. A1) Describe the treatments available to help infertile couples to have children ...read more.