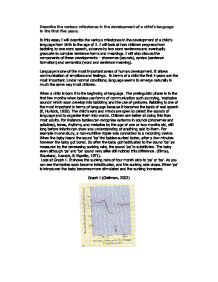 Describe the various milestones in the development of a child's language in the first five years. In this essay I will describe the various milestones in the development of a child's language from birth to the age of 5. I will look at how children progress from babbling to one word speech, advance to two word sentences and eventually graduate to complex sentence forms and meanings. I will also discuss the components of these developments - phonemes (sounds), syntax (sentence formation) and semantics (word and sentence meaning). Language is one of the most important areas of human development. It allows communication of emotions and feelings. In terms of a child the first 5 years are the most important. Under normal conditions, language seems to emerge naturally in much the same way in all children. When a child is born it is the beginning of language. The prelinguistic phase is in the first few months when babies use forms of communication such as crying, 'explosive sounds' which soon develop into babbling and the use of gestures. Babbling is one of the most important in terms of language because it becomes the basis of real speech (E, Hurlock, 1950). ...read more.

For instance a toddle reaches to the mother crying out 'ca-ree-oo'. They assume that there is a three syllable word for 'pick me up'. The problem has been identified that phonemes and syllables run right into each other and overlap in speech. Before a child of early language development knows the meaning of words they have been said to be 'sensitive to these frequencies, busily recording cases of frequent syllable sequences and using this information to decide which sequences are an actual words of language.' (Gleitman, 2003) this process has been demonstrated experimentally, for example 'bidaku' experiment. (Gleitman, 2003 Page 341). Children begin to understand a few word meanings during the first year. In children of this age interactions seem to be either with adults such as a 'hi', or by the use of names such as 'dada' and the rest are simple nouns such as duck. however pronunciation is not always clear. Children of this age also miss out function words and suffixes such as 'the, and, and -ed'. Although these items are most likely heard the most by infants, they rarely use them. ...read more.

Such as 'walked' and 'talked' and also correctly use irregular forms such as ran, came and ate. However by the age of four or five, children start to say irregular verbs as though they were regular. Hence 'runned' and 'holded'. These errors in language help suggest that imitation is not solely how language is learned. Investigators have found that once children have identified the pattern of simply adding the -ed suffix to a verb when speaking of past, a child gets carried away, and so over regularization errors occur. This soon decreases when a child realises that there are certain exceptions to the pattern. (Gleitman, 2003). In conclusion it has been identified that as the child naturally reaches language developmental milestones, simple skills need to be mastered before the more complex skills can be learned. There is a general age and time when a child reaches these milestones. By eighteen months of age, most children can say eight to ten words. By age two, most are putting words together in crude sentences such as "more milk." During this period, children rapidly learn that words symbolize or represent objects, actions, and thoughts. At ages three, four, and five, a child's vocabulary rapidly increases, and he or she begins to master syntax (sentence formation) and semantics (word and sentence meaning). ...read more.