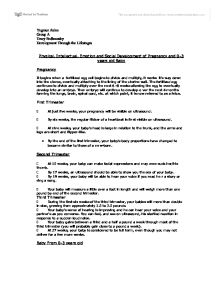 Development Through the Lifestages Physical, Intellectual, Emotion and Social Development of Pregnancy and 0-3 years old Baby

Yagmur Aslan Group A Tracy Podbransky Development Through the Lifestages Physical, Intellectual, Emotion and Social Development of Pregnancy and 0-3 years old Baby Pregnancy It begins when a fertilized egg cell begins to divide and multiply, it works it's way down into the uterus, eventually attaching to the lining of the uterine wall. The fertilized egg continues to divide and multiply over the next 6-8 weeks allowing the egg to eventually develop into an embryo. Then embryo will continue to develop over the next 4 months forming the lungs, brain, spinal cord, etc. at which point, it is now referred to as a fetus. First Trimester � At just five weeks, your pregnancy will be visible on ultrasound. � By six weeks, the regular flicker of a heartbeat is first visible on ultrasound. � At nine weeks, your baby's head is large in relation to the trunk, and the arms and legs are short and flipper-like. * By the end of the first trimester, your baby's body proportions have changed to become similar to those of a new-born. Second Trimester � At 15 weeks, your baby can make facial expressions and may even suck her/his thumb. ...read more.

Physical Development & Social-emotional Development 3-6 Months Babies laughs aloud, by about 3 months and enjoys being played with them, laughs, kicks, by 4 months. looks at hands and plays with own fingers, about 3 months. They can grasp an object by 3-4 months. They start being able to chew stuff, watches activities of those around, makes eye contact people by 5-6 months. Babies recognises their mother and other close family members, shows interest in what is going on around him/her. turns head to a talking person by 5 months. They listen to sounds by 4 months. Physical Development & Social-emotional Development 6-9 Months S/He is starting to sit up, move by rolling, reach out and act on the world. S/He worries that you might not come back when you go away from him and lets you know it. S/He will really respond to you giving him lots of things to look at, touch, play with, and safely put in his mouth. Time playing on his tummy on the floor will strengthen his back and get his legs into crawling mode. They know familiar people, and starts to withdraw from strangers. Begins to turn around when they hear there name is called and stretches up their arms to be picked up. ...read more.

They are able to run fast without falling over when turning corners or stopping. Babies are able to bring a small chair to the table and sit on the chair at the table. Physical and Social-Emotional Development 2-3 years They try to copy adults, and may be able to be helpful for example help with putting toys away. Starting to play lots of imagination games and starting to join in with other children's play. They often try hard to be independent, such as saying no a lot, or 'me do'. They kick a large ball gently but not usually in the 'right' direction and throw a ball in approximately the right direction. Plus they climb up stairs by themselves. Being able to feed themselves with a spoon and cup and able to help to dress and undress. Many of the children, but not all, develop to the stage that they can manage toilet training. Able to eat with a spoon and fork. talk clearly enough that strangers are able to understand at least some of what they are saying and start using words such as "me" and "you" correctly. Asking lots of questions starting with "what", "where", "why". Likes to listen to stories, demanding favourite stories repeatedly and making up long stories while playing. Putting the words into short sentences and follow simple instructions ?? ?? ?? ?? ...read more.

Try to explain some of the reasons behind babies' change in behaviour at certain points in their life. What causes them to be able to recognise their carers?

The writing style was in need of improvement because of the frequency of grammatical errors which would not be acceptable for work at this level. The errors could be minimised by careful proof-reading.