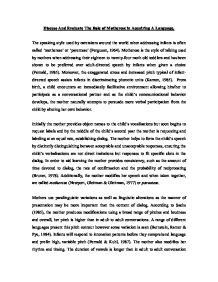 Discuss And Evaluate The Role of Motherese in Acquiring A Language.

Discuss And Evaluate The Role of Motherese in Acquiring A Language. The speaking style used by caretakers around the world when addressing infants is often called 'motherese' or 'parentese' (Ferguson, 1964). Motherese is the style of talking used by mothers when addressing their eighteen to twenty-four moth old toddlers and has been shown to be preferred over adult-directed speech by infants when given a choice (Fernald, 1985). Moreover, the exaggerated stress and increased pitch typical of infant-directed speech assists infants in discriminating phonetic units (Karzon, 1985). From birth, a child encounters an immediately facilitative environment allowing him/her to participate as a conversational partner and as the child's communicational behavior develops, the mother naturally attempts to persuade more verbal participation from the child by altering her own behavior. Initially the mother provides object names to the child's vocalisations but soon begins to request labels and by the middle of the child's second year the mother is requesting and labeling at an equal rate, establishing dialog. The mother helps to form the child's speech by distinctly distinguishing between acceptable and unacceptable responses, ensuring the child's verbalisations are not direct imitations but responses to fit specific slots in the dialog. In order to aid learning the mother provides consistency, such as the amount of time devoted to dialog, the rate of confirmation and the probability of reciprocating (Bruner, 1978). Additionally, the mother modifies her speech and when taken together, are called motherese (Newport, Gleitman & Gleitman, 1977) ...read more.

They also present new words in a great variety of contexts, which would highlight the transitional probabilities of the new words against a variety of contexts (Goodsitt, 1993). This data suggests that the modifications made by adults unconsciously when they speak to infants plays a role in helping infants map native-language input. Motherese involves many re-casts by the adult. Re-casts occur when an adult repeats a child's speech, while adding complexity and expanding vocabulary. Re-casts expose the child to new forms and structures, while providing more fuel for language acquisition than would immediate imitation (Goodluck, 1986). An example of a re-cast is a child saying "up" whilst the mother follows with "yes, mummy will pick you up". In these re-casts there is also a tendency to avoid using personal pronouns such as "I" and "you" since both can be very confusing to the child. It is difficult for the child to recognise that "you" can be applied to more than one person hence, the parent most often than not refers to both herself and the child using the respective nouns "mummy" and "child" for example. In both English and French the amount of parental labeling or naming varies with the age and development of the child but a relationship still exists between the amount of adult labeling and the child's consequent growth in vocabulary (Graham & Sippola, 1995). Choi & Gopnik (1995) produced evidence to suggest that initial parental emphasis on nouns from Mandarin, Korean, Italian, and English is not universal although gesturing and use of noun labels in English decrease with development regardless. ...read more.

In conclusion, much remains to be learned about language acquisition however it can be deduced that motherese is beneficial to a child's acquisition of language regardless of whether it is completely necessary for language development or not. The aim of motherese may not be to teach language however it facilitates development through providing an opportunity for children to practice, improve, and enhance their language abilities. The caregiver's efforts combined with the child's own influences produce a suitable relationship for the input, feedback, acquisition and practice of language. Motherese may also serve to aid a child in the acquisition and comprehension of language particular rules which are otherwise largely unpredictable principles of universal grammar. However, factors such as socio-economic background, where toys promoting language utilasation cannot be bought will hinder the effects of motherese regardless of whether motherese is in effect or not; birth order, position in the family, and siblings also have an effect on early language development, this is because single children have a greater opportunity to communicate effectively with adults as compared to children with many siblings as may therefore develop language at a faster pace. Ethnicity, parents' mother tongue and parents' work hours are more examples of factors that directly affect the success motherese can have on children's language development. Consequently, for a child to fully benefit from the effects of motherese he/she must boast optimal conditions, if this is not possible, as is the case with many individuals, motherese may not act as beneficially as possible, however it will still serve to assist in language acquisition. ...read more.