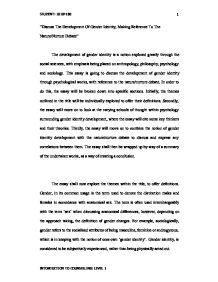 &quot;Discuss The Development Of Gender Identity, Making Reference To The Nature/Nurture Debate&quot;

"Discuss The Development Of Gender Identity, Making Reference To The Nature/Nurture Debate" The development of gender identity is a notion explored greatly through the social sciences, with emphasis being placed on anthropology, philosophy, psychology and sociology. This essay is going to discuss the development of gender identity through psychological works, with reference to the nature/nurture debate. In order to do this, the essay will be broken down into specific sections. Initially, the themes outlined in the title will be individually explored to offer their definitions. Secondly, the essay will move on to look at the varying schools of thought within psychology surrounding gender identity development, where the essay will cite some key thinkers and their theories. Thirdly, the essay will move on to combine the notion of gender identity development with the nature/nurture debate to discuss and express any correlations between them. The essay shall then be wrapped up by way of a summary of the undertaken works, as a way of creating a conclusion. The essay shall now explore the themes within the title, to offer definitions. Gender, in its common usage is the term used to denote the distinction males and females in accordance with anatomical sex. The term is often used interchangeably with the term 'sex' when discussing anatomical differences, however, depending on the approach taking, the definition of gender changes. ...read more.

The premise of this theory is that of role observation, and the mimicking of behaviours, known as operant conditioning and vicarious learning, respectively. Applied to gender development by Bandura and Mischel; Social learning theory stresses many important factors in the development of gender identity; these include reinforcement, observational learning, modelling and imitation. Social learning theory incorporates both notions of primary and secondary socialisation, including parents, peers and the mass media as important for gender identity development. Cognitive development theories stem from the works of Jean Piaget. Piaget was one of the first psychologists to look at the way in which children think and reason. Despite moves in the 1960's and 70's to revaluate his theories, many of his basic principles and assumptions have been empirically supported to be correct. Piaget's works identified that children look only at a superficial level, focusing on surface appearances rather than looking for more depth. Piaget's works were greatly extended by Kohlberg to explain the development of gender concepts - Kohlberg argued that an important factor in a childs development of gender concepts is the acceptance that it is fixed and unchanging - regardless of surface appearances. Kohlberg advocates that a child must develop through three stages to understand gender - initially children do not use gender in any way, to categorise themselves or others. ...read more.

Outlining the importance of socialisation in the home (primary) and secondary through peers and the mass media. Cognitive Development Theories are in keeping with the nature side of the debate, where, in Kohlberg's view, gender development occurs through the resolution of three stages - where at the end of stage three the child is able to determine that gender is an underlying and unchanging aspect of identity. In conclusion, this essay has discussed the development of gender identities. To summarise the works undertaken, initially definitions were offered of the themes in the essay title, which then moved on to discuss the psychological works of Psychodynamics, Social Learning Theory and Cognitive Development Theories, writing in relation to the nature/nurture debate. Despite there being many more theories of gender identity development, certain aspects were omitted in order to reflect on different positions in the nature/nurture debate. As well as issues such as sexual orientation and androgyny were also over looked. Despite strong arguments arising from each theory, it is difficult to accurately and empirically deduce the exact role of nature or nurture in the development of gender identities as both are constantly interacting throughout ones own life, and at a time of radical social changes (from the writing of these theories), with immense family diversity including single parent and same sex families. ...read more.