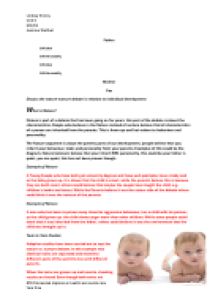 Discuss the nature-nurture debate in relation to individual development.

﻿Lindsey Storey Unit 4 M1/D1 Jasmine Welfoot Father 50% DNA 50% Personality 50% DNA 50% Personality Mother You Discuss the nature-nurture debate in relation to individual development. What is Nature? Nature is part of a debate that has been going on for years; this part of the debate is about the characteristics. People who believe in the Nature instead of nurture believe that all characteristics of a person are inherited from the parents. This is from eye and hair colour to behaviour and personality. The Nature argument is about the genetic parts of our development, people believe that you inherit your behaviour, looks and personality from your parents. Examples of this could be the diagram, Nature believers believe that your inherit 50% personality, this could be your father is quiet, you are quiet, this has not been proven though. Example of Nature A Young Couple who have both got university degrees and have well-paid jobs, have a baby and as the baby grows up, it is shown that the child is smart, while the parents believe this is because they are both smart, others could believe that maybe the couple have taught the child, e.g. children?s books and tutors. While the Parents believe it was the nature side of the debate others could think it was the nurture of the parents. Example of Nature A man who has been to prison many times for aggressive behaviour, has a child with his partner, as the child grows up, the child shows anger more than other children. While some people could think that it was inherited from the father, others could believe it was the environment that the child was brought up in. Twin to Twin Studies Adoption studies have been carried out to test the nature vs. nurture debate. In this example two identical twins are separated and moved to different parts of the world to live with different parents. ...read more.

If this isn?t taught by the parent/carer this could affect them when they start school as they would be behind in their development compared to other children. Another task to be taught to the child would be the child?s routine, children need a stable routine to get ready for preschool/school, and this includes brushing teeth, washing themselves and getting ready for morning or night time. Example of Nurture for intellectual development An example of nurture is two families, one consisting of a mother and father, who both have jobs and the other a single parents with four other children. Both families have a child at the preschool, the lady with the four children, her child is quiet and withdrawn for many activity?s, this would show how the child?s environment has affected her developing her speech. Emotional Development By the end of three years a child should have developed emotionally so they are ready for school, this is thought to be easier for the parents and child if the child has been to a pre-school or play group beforehand. Nature Emotionally the child?s natural instincts such as their emotions and feelings should be noticed and the child should be able to easily show how they are feeling. Another natural skill they have would be imitating others, this could be adult and child roles, these can be roles such as Doctor, nurse and mother as well as many more. An example of nature in emotional development A child dresses up as a lollypop lady and asked the children to cross the pretend road, this shows the child has a creative and imaginative mind; this can be increased by books and television. Nurture Children?s emotional development is increased by their parents, if a child is spoken to a lot they are more likely to be well spoken and have a wide vocabulary. The child should also be taught what is theirs. ...read more.

Social development Some teenagers are thought to be quite sociable and find to make friends easily. Nurture It is normal for a teenager to have arguments with other teenagers and adults; this is a part of life as not everyone agrees with the same thing. Some teenagers find that peer pressure can be hard and that they have to partake in illegal activities, with others can say no. Teenagers find romance and friends more important at this age and it can be more important than other things such as education. Teenagers can be influenced by other teenagers on what they wear and what music they listen too. It would be a natural thing for teenagers to begin to create feelings for one another; this could be male to male, female to female or female to male. An example of nurture in social development A teenage male notices his friends have begun socialising with females and some have gotten into relationships with one another, when he feels left out, he asks his friends why this is happening. His mates tell him it is normal that soon he will find a girlfriend or boyfriend. Nature It is a natural thing for teenagers to sleep for 9+ hours, this can affect their schooling and they need an alarm clock to wake them up. It is also a natural thing for teenagers to spend more time with friends than family, even though this can be for many reasons. As teenagers get ready to leave school and start jobs or higher education, the need for independence from parents/carers is high as this can make the teenager feel trapped. As teenagers start becoming young adults, they develop their understanding of what?s right or wrong. An example of nature in social development A teenager boy aged 16 is caught with stolen bike and is arrested and bailed. Half a year later at the court case the teenager realises what he did was wrong, this is because as he has grown up so has his understanding of what?s right or wrong. BTEC Extended diploma in health and social care Year One ...read more.