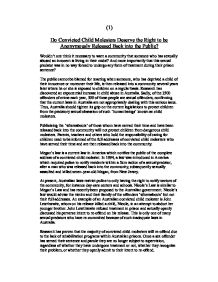 Do Convicted Child Molesters Deserve the Right to be Anonymously Released Back into the Public?

(1) Do Convicted Child Molesters Deserve the Right to be Anonymously Released Back into the Public? Wouldn't one think it necessary to warn a community that someone who has sexually abused an innocent is living in their midst? And more importantly that this sexual predator was in no way forced to undergo any form of treatment during their prison sentence? The public cannot be blamed for reacting when someone, who has deprived a child of their innocence or moreover their life, is then released into a community several years later where he or she is exposed to children on a regular basis. Research has discovered an exponential increase in child abuse in Australia. Sadly, of the 3500 offenders of crime each year, 500 of these people are sexual offenders, confirming that the current laws in Australia are not appropriately dealing with this serious issue. Thus, Australia should tighten its grip on the current legislations to protect children from the predatory sexual obsession of such 'human beings' known as child molesters. ...read more.

Nicole's law would advise the victim and their family of the offenders 'whereabouts' but not their full addresses. An example of an Australian convicted child molester is John Lewthwaite, whom on his release killed a child, Nicole, in an attempt to abduct her younger brother. John Lewthwaite refused treatment in prison and actually openly discussed his perverse intent to re-offend on his release. This is only one of many sexual predators who have re-committed because of such inadequate laws in Australia. Research has proven that the majority of convicted child molesters will re-offend due to the lack of rehabilitation programs within Australian prisons. Once a sex offender has served their sentence and parole they are no longer subject to supervision, regardless of whether they have undergone treatment or not, whether they recognize their problem, or whether they openly admit to their intent to re-offend. (2) Statistics have confirmed that without treatment facilities in prison, roughly 60-70% of sex offenders will re-offend, while less than half of sex offenders who undergo a prison rehabilitation program are reported to re-offend. ...read more.

The traumatic consequences of sexual abuse in childhood have been linked to long-term effects which leave permanent physical and psychological scarring and ultimately affect their entire lives. The effects of sexual abuse differ from one victim to another. Some direct results include depression, lowered self-esteem, learning difficulties and long-term psychological damage. Additionally, studies have in fact proven that younger victims can often become sexually abusive to other children, hence repeating the perverse cycle. Due to the increased rate of sexual abuse in Australia, the Australian Government should be upholding the rights of all who abide by the law by notifying residents of the complete addresses of released child-molesters and by also making in-prison treatment programs compulsory. This would simply involve introducing a law to assist parents, child-carers and others to live their lives by becoming vigilant whilst additionally lowering the rate of sexual abuse by these dangerous creatures who pose a serious threat to society. Written By Natasha Guthrie ...read more.