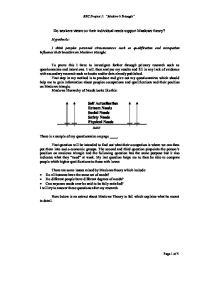 Do workers views on their individual needs support Maslows theory?

Do workers views on their individual needs support Maslows theory? Hypothesis: I think peoples personal circumstances such as qualification and occupation influence their location on Maslows triangle. To prove this I have to investigate further through primary research such as questionnaires and interviews. I will then analyse my results and fill in any lack of evidence with secondary research such as books and/or data already published. First step in my method is to produce and give out my questionnaires which should help me to gain information about peoples occupations and qualifications and their position on Maslows triangle. Maslows Hierarchy of Needs looks like this: Self Actualisation Esteem Needs Social Needs Safety Needs Physical Needs BASE There is a sample of my questionnaire on page ____. First question will be intended to find out what their occupation is where we can then put them into socio-economic groups. The second and third question pinpoints the person's position on maslows triangle and the following question has the same purpose but it also indicates what they "need" at work. My last question helps me to then be able to compare people whith higher qualifications to those with lower. There are some issues raised by Maslows theory which include: * Do all humans have the same set of needs? * Do different people have different degrees of needs? * Can anyones needs ever be said to be fully satisfied? I will try to answer these questions after my research. Here below is an extract about Maslows Theory in full which explains what he meant in detail. (Thanks to C. George Boeree for letting me use extracts and parts of your biography about Maslow for free at www.ship.edu/~cgboeree/ Theory One of the many interesting things Maslow noticed while he worked with monkeys early in his career, was that some needs take precedence over others. For example, if you are hungry and thirsty, you will tend to try to take care of the thirst first. ...read more.

If you have significant problems along your development -- a period of extreme insecurity or hunger as a child, or the loss of a family member through death or divorce, or significant neglect or abuse -- you may "fixate" on that set of needs for the rest of your life. This is Maslow's understanding of neurosis. Perhaps you went through a war as a kid. Now you have everything your heart needs -- yet you still find yourself obsessing over having enough money and keeping the pantry well-stocked. Or perhaps your parents divorced when you were young. Now you have a wonderful spouse -- yet you get insanely jealous or worry constantly that they are going to leave you because you are not "good enough" for them. You get the picture. Self-actualization The last level is a bit different. Maslow has used a variety of terms to refer to this level: He has called it growth motivation (in contrast to deficit motivation), being needs (or B-needs, in contrast to D-needs), and self-actualization. These are needs that do not involve balance or homeostasis. Once engaged, they continue to be felt. In fact, they are likely to become stronger as we "feed" them! They involve the continuous desire to fulfill potentials, to "be all that you can be." They are a matter of becoming the most complete, the fullest, "you" -- hence the term, self-actualization. Now, in keeping with his theory up to this point, if you want to be truly self-actualizing, you need to have your lower needs taken care of, at least to a considerable extent. This makes sense: If you are hungry, you are scrambling to get food; If you are unsafe, you have to be continuously on guard; If you are isolated and unloved, you have to satisfy that need; If you have a low sense of self-esteem, you have to be defensive or compensate. ...read more.

My data proves that people can have completely different needs. An example of this is the art director (database #9). He states that his job allow him to fulfil his potential as a whole person. However, his need is 'a decent budget'. According to Maslow, you cannot fulfil your potentials or self-actualize unless you have completed any earlier levels. Another issue raised by Maslows theory is "can anyones needs ever be said to be fully satisfied?" I haven't got any results or evidence to prove that anyone has been "self-actualized". My secondary source of research ('Nuffield Economics and Business') states that "perhaps the hierarchy diagram should have an open top to suggest that human desire for achievement is limitless". Unfortunately I have no evidence to back this up and the question is rather a matter of psychology... At last "do workes views on their individual needs support Maslow's theory?" I Hypothesised that peoples qualification and occupation influence this. I seem to be correct to a certain extend on this matter. Generally people who have better qualifications and occupation (usually in socio-economic groups A and B) tend to be more satisfied and further up Maslow's triangle.Their needs are different to. However, there are exceptions. A prime example in my research is the D.J (Database #19) compared to the structual engineer (Database #6). The D.J is in a well below socio-economic group but he is satisfied unlike the structual engineer which is in the socio-economic group A (the highest, classed as proffesional). The DJ seem further up Maslow's triangle. This point disproves my hypothesis. My conclusions have been rather general than direct and I won't be able to make up an own theory, mainly because of two reasons: 1) I do not have a reliable or complete set of results and the amount and vareity is limited. I need a whole lot more research to draw such conclusions. 2) Individual views on their needs and position is completely up to the persons personality. Some people have answered exaggerated opptimistic/pessimistic. BEC Project 1: "Maslow's Triangle" Page 1 of 5 ...read more.