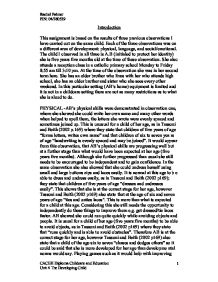 Each of the three observations was on a different area of development: physical, language, and social/emotional. The child I observed in all three is A.B (initialed to protect her identity) she is five years five

Introduction This assignment is based on the results of three previous observations I have carried out on the same child. Each of the three observations was on a different area of development: physical, language, and social/emotional. The child I observed in all three is A.B (initialed to protect her identity) she is five years five months old at the time of these observation. She also attends a reception class in a catholic primary school Monday to Friday 8:55 am till 3:10 pm. At the time of the observation she was in her second term here. She has an older brother who lives with her who attends high school, she has an older brother and sister who she sees every other weekend. In this particular setting (AB's home) equipment is limited and it is not in a childcare setting there are not as many restrictions as to what she is aloud to do. PHYSICAL -AB's physical skills were demonstrated in observation one, where she showed she could write her own name and many other words when helped to spell them, the letters she wrote were evenly spaced and sometimes joined up. This is unusual for a child of her age, as in Tassoni and Beith (2002 p.169) where they state that children of five years of age "forms letters, writes own name" and that children of six to seven years of age "handwriting is evenly spaced and may be joined". It would appear from this observation, that AB's physical skills are progressing well but at a further stage than what would have been expected at her age (five years five months). Although she further progressed than usual she still needs to be encouraged to be independent and to gain confidence. In the same observation she also showed that she could undress herself using small and large buttons zips and laces easily. It is normal at this age to be able to dress and undress easily, as in Tassoni and Beith (2002 p169); they state that children of five years of age "dresses and undresses easily". ...read more.

I think AB needs to do some group and pair work with boys and girls, she is not totally against playing with boys just at school she prefers to play with girls so this would not be hard. I feel that she only doesn't play with boys when it is her own free choice, which is usual for a child of her age. AB also gave a full and very detailed description of herself, by doing this she also showed that she was thinking about what she was saying. Again this is usual for a child of AB's age as Tassoni and Beith (2002 p248) state that between the ages of five and seven years "Children are able to give a full description of themselves - e.g. 'My name is...' 'I have a brother.'" This shows that she is at the correct stage of self-concept for her age (five years five months). Also in observation three AB showed that has a close friendship with her friend who was visiting, I think that I could positively say that they have known each other for a while either that or they see a lot of each other. She needs plenty of opportunities to describe herself such as in a story or up in front of the class as a sort of show and tell, that everyone will do, will help improve her already well progressed descriptive skills. The curriculum guidance for the Foundation Stage (Early Learning Goal for making relationships p36) towards the end of the Foundation Stage a child "forms good relationships with adults and peers" this leads me to suggest that she is slightly further ahead than a child of her age would normally be, because it is at the end of the Foundation Stage therefore the end of the reception year. The stage criteria for social interaction and self concept have a vague age range i.e. ...read more.

It is important to carry it out otherwise the children may think that they will get away with anything they do. * Facial expressions and body language- Giving children a 'look' will normally control behaviour if they understand that the practitioner is unhappy. Also the practitioner can praise the child afterwards if they do stop. * Removal of equipment -the practitioner will remove the equipment after trying to use different strategies first of all. Most often used when a child is putting their self or others in danger as a last resort, it has to be explained to the child why the items are being removed. * Time out - a period of time where the child in question sits separately from the rest of the group after instruction from the practitioner, to think about what they have done and why they have been given a time out, not for a long period of time. The adult in any childcare related setting has to be a good role model, they have to set and carry out the rules for the setting and encourage and stimulate the children. They also have the ability to influence the children in different ways, for example the way the children think about cultural variations. The childcare worker needs to be neutral to all races, religions, cultures, sexes, abilities and beliefs. They have to focus on the individual needs of every child. The social learning theory (developed by Albert Bandura 1925-) showed that children learn through watching others. The people who care for and work with children are very powerful role models and their personality and behaviour has great influence over the behaviour and learning of the children. Operant conditioning -behavioural theory (B F Skinner 1904-1990) is where a child is encouraged by being told they have something to look forward to e.g. after we have cleaned up we can go outside and play. B F Skinner also shows that children learn through positive (pleasant experiences) and negative (bad experiences) reinforcement. He also suggested that if a practitioner was to ignore a certain type of behaviour might disappear. ...read more.