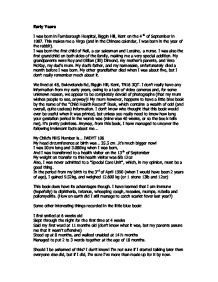 Early Years I was born in Farnborough Hospital, Biggin Hill, Kent on the 4th of September in 1987. This makes me a Virgo (and in the Chinese calendar, I was born in the year of the rabbit). I was born the first child of Neil, a car salesman and Loraine, a nurse. I was also the first grandchild on both sides of the family, making me a very special addition. My grandparents were Roy and Gillian (Jill) Dimond, my mother's parents, and Vera McKay, my dad's mum. My dad's father, and my namesake, unfortunately died a month before I was born. My other grandfather died when I was about five, but I don't really remember much about it. We lived at 48, Swievelands Rd, Biggin Hill, Kent, TN16 3QT. I don't really have any information from my early years, owing to a lack of video cameras and, for some unknown reason, we appear to be completely devoid of photographs (that my mum wishes people to see, anyway)! My mum however, happens to have a little blue book by the name of the "Child Health Record" Book, which contains a wealth of odd (and overall, quite useless) information. I don't know who thought that this book would ever be useful when it was printed, but unless you really need to know how ...read more.

About a year before I was born, my parents came across an abandoned dog under some railway arches. He was named "Archie", as the level of wit that my parents possessed did not allow for a better standard of title for the new animal. (My mother had the propensity for humour, it turns out, as she wanted to call the dog Arthur, because he had arfa-white face and arfa-black face. The wit in my family never ceases to amaze me...) Soon after my brother was born, I was deported to a play-school in Biggin Hill. It was here that I formed my first friendships, according to my mum. Again, I remember nothing. I can only remember snatches of things from my early years... I can remember my brother falling into the pond in my garden, I can remember bits of the inferno that my dad and granddad created whilst cooking a barbecue in our garden, I can remember my brother shaving his tongue, but I don't recall whether it was my idea for him to do it, or his... (selective memory strikes again...) At the age of four, we moved into High Beech Glade, in St. Leonards-on-Sea. This was the first time I had my own bedroom, and this new home afforded me many new and welcome opportunities, such as learning to ride a bike. ...read more.

My dad then apologised for his indisputable lack of concern, and proceeded to explain, that his apparent cruelty stemmed from a morbid fear of wasps, he claimed that the beating with the Friday-Ad was his attempt to remove the offending beast from my face! As the wasp injected it's poison into my eye, I had closed my eye, and this had made the wasp's wing get caught between my eyelids. On the journey back to my house, the wasp had been stinging all over my face in a vain attempt to free itself. I received a total of eleven stings around my right eye, and couldn't see very well that night. The next morning, when I woke up, my vision in that eye was blurry, but not too bad. When I looked in the mirror, my eye had almost completely closed up, and had taken on an Oriental appearance. When asked if I still wanted to go to school, I said that I did (being a model student and all...), and got laughed at all day for the way I looked! Ever since that fateful day, I have run from any kind of flying, stinging creature. Wasps are evil. At least if a bee stings you, you have the satisfaction of knowing it will die for its sin. Wasps don't stop... ...read more.