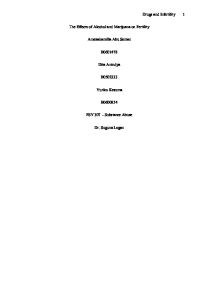 Effect of Marijuana on Fertility

The Effects of Alcohol and Marijuana on Fertility Amezakamilla Abu Seman B0601478 Dita Anindya B0502333 Yuriko Kesuma B0600854 PSY 307 - Substance Abuse Dr. Suguna Logan The topic for this written report is the effect of alcohol and marijuana on fertility. There are various types of drugs which are very well-known these days where people use different types of drugs in extremely divergent motive underneath. Drugs are defined as chemical substances that modify the structure of the chemical reaction inside the human body in some ways when taken into the body (Levinthal, 2008). Drugs could be categorized as illicit and licit drugs, whereas the intention is differentiated into recreational and instrumental purpose. Due to its mixture of numerous chemical ingredients, drugs affect people psychologically and physiologically in different ways specifically infertility. Infertility is the inability or failure to conceive and have offspring after a year of regular intercourse without the use of contraception (FamilyDoctor, 2006). Not many people are aware of the side effects of drugs on human fertility, for example the effect of the licit drugs - alcohol and tobacco, and illicit drug such as marijuana on the inability to produce offspring in the long run. Nowadays many youths take drugs due to its availability and peer influence although they know the varied consequences. However, they disregard the matter of fact that fertility is one of the side effects with the continuation of the substance abuse. In other cases, people need to take instrumental drugs for health purposes and had to bear the consequences of being infertile. Therefore this phenomenon has made us interested in further understanding the chosen topic. ...read more.

Not only an abnormality of sperm swimming behavior does take into consideration, frequent smokers of cannabis do have greater prospects and likelihood of having a significant less seminal fluid as well as a sudden reduced in the number of the total sperm produced ( University of Buffalo, 2003). What is not acknowledged by the scientists is how long does it takes for fertility to recover after people stop smoking the Marijuana. THC remains stored in fat for a long period, so the process may be quite slow, causing a low probability of the male reproduction system to have everything back to normal. Coffee perks up fertility levels, the caffeine contained within benefits up slow-moving sperm (British United Provident Association, 2003). Coffee boosts male fertility and Cannabis use may impair male fertility. Among the strength of the alcohol article is it reviews the alcohol consumption from the low, moderate, and heavy use of it based on the research that has been done. The fertility researcher has done the study on the different level of alcohol consumptions. In addition, the categorization in level of alcohol consumption made us to be aware on how it is going to benefit our society in decreasing the alcohol consumption from heavy to the low dose intake and finally free from it. Furthermore, the article addresses other factors such as one's weight, age, and etcetera may have an impact on one's fertility other than alcohol consumption. Even though, it does not emphasize more about those factors, but this information would be helpful for people who is in the exposure of alcohol intake or is planning to take alcohol. ...read more.

There are numerous ways where this issue can be improved. One of the ways is through medical breakthrough where substance abuser can undergo in vitro procedure to conceive a child. Another way which is very important is that to support the substance abuser to refrain from abusing the substance such as Alcoholic Anonymous group support. In addition to that, family is the key player in helping the substance abuser to quit. Family can give their support to the substance abuser to motivate them and to make them realize that their family cares (Micheal's House, 2008). It is also wise to go the rehabilitation where they can monitor the substance abuser and can help them systematically according to evidence based practices such as alcohol rehab and marijuana rehab centers (Micheal's House, 2008). As the saying goes, prevention is better than cure so another action to be taken is to educate people about this issue as not many people are aware of this. The government should also regulate a new policy regarding this issue for example completely ban alcohol and diminish marijuana, alcohol as well as other drugs. In conclusion, alcohol and marijuana are among the most common drugs due to its availability. It is undeniable that people do know about the negative side effects of the drugs however not many would have thought that this may affect their own future generations. Our recommendation is to educate people about this issue. People are well educated with the motion of drugs cause death but they are not educated on the fact that they might not be able to have their own child. We believe that this will impact individuals as most people dream to have a family one day. ...read more.