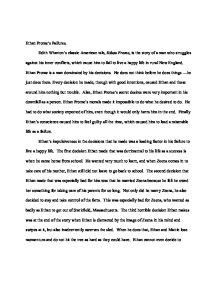 Ethan Frome's Failures. Edith Wharton's classic American tale, Ethan Frome, is the story of a man who struggles against his inner conflicts, which cause him to fail to live a happy life in rural New England. Ethan Frome is a man dominated by his decisions. He does not think before he does things -he just does them. Every decision he made, though with good intentions, caused Ethan and those around him nothing but trouble. Also, Ethan Frome's secret desires were very important in his downfall as a person. Ethan Frome's morals made it impossible to do what he desired to do. He had to do what society expected of him, even though it would only harm him in the end. Finally Ethan's conscience caused him to feel guilty all the time, which caused him to lead a miserable life as a failure. Ethan's impulsiveness in the decisions that he made was a leading factor in his failure to live a happy life. ...read more.

Ethan cannot even decide to commit suicide without being a failure to Mattie and himself. Ethan's decisions in life play a large role in how his life is carried out. He decides things on impulse, then regrets later what he decided, but is too prideful to take them back. These decision, are a major cause in Ethan Frome's downfall. The morals instilled in Ethan Frome since childhood caused him to lead a life of misery. He desired many things that the society around him thought conflicted with its basic standard of conduct. For example, Ethan's desire to run away after his father dies, and leave his sick mother in Zeena's care was considered immoral by many in the community. He was expected to stay and take care of what was left of his family, and because he was raised that way he did stay. Another example is Ethan's secret desire to corrupt Mattie's innocence while still married to Zeena. ...read more.

Zeena was also the cause of another pang of conscience when Ethan's mother died. Ethan felt guilty that Zeena should receive nothing for all the work she did around the farm while his mother was sick. Therefore he married her. His marriage caused him nothing but unhappiness, but he could not do anything about that. A third example of his conscience taking control of Ethan was when he tried to take his life by crashing into the tree. He saw his wife, Zeena's, face in his mind, and his conscience made him wonder whether he could really leave her alone like this just long enough to make him swerve and lose his momentum. Ethan fought away his conscience, but not quickly enough. Edith Wharton's tale about a man in New England, and his life as a complete failure, is truly a classic. She captures the way Ethan's individual traits caused him to do nothing but harm to himself. His impulsiveness in his decisions caused him to rush into things he wasn't ready for. And his morals and conscience worked together to destroy any chance of Ethan attaining the things he desired. ...read more.