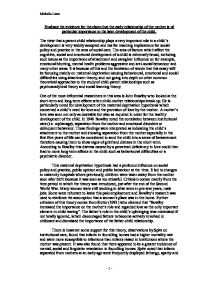 Evaluate the evidence for the claim that the early relationship of the mother is of particular importance to the later development of the child.

Evaluate the evidence for the claim that the early relationship of the mother is of particular importance to the later development of the child. The view that a parent-child relationship plays a very important role in a child's development is very widely accepted and has far reaching implications for social policy and practice in the area of social care. The area of factors which affect the cognitive, social and emotional development of a child is extremely broad, including such issues as the importance of attachment and caregiver influence on for example, emotional blunting, mental health problems aggressive and anti-social behaviour and many other areas. It is because of this and the limitation of words that this essay will be focusing mainly on maternal deprivation causing behavioural, emotional and social difficulties using attachment theory, and not going into depth on other common theoretical approaches to the study of child-parent relationships such as psychoanalytical theory and social learning theory. One of the most influential researchers in this area is John Bowlby who looked at the short-term and long-term effects when child-mother relationships break-up. He is particularly noted for development of the maternal deprivation hypothesis which concerned a child's need for love and the provision of love by the mother. ...read more.

Experimentation on baby rhesus monkey's by Harlow and Harlow disputed an area of Bowlby's argument; they found that infants suffered little affects from the loss of their natural mother as long as they have a surrogate caregiver responsive to their needs, however when the infant monkey's were separated and not provided with a surrogate, they displayed signs of acute anxiety and distress. It was also observed that individuals developed deviant social and emotional behaviours, failing to relate to other monkeys or engage in normal sexual activities. Females were therefore very hard to impregnate and when able to produce offspring, appeared to be totally inept at childcare, frequently rejecting them or killing them. Further research by Harlow indicated that monkey's can develop normally even without a mother figure as long as they have other young monkeys to interact with, similarly, if young monkeys are separated from peers but not mother, behaviour is seen to be lacking in affection and highly aggressive. This research contradicts the view that the mother is a key figure in the healthy development of a child and suggests the role of the mother in early attachment has little impact on the later development of the child. ...read more.

They found these temperamental patterns persisted over time and were influential in adjusting to settings. This suggests that some of the concordance between childhood attachment types and adult behaviour should be put down individual temperament and personality. The fact that the idea that a mother's interaction with her child affects later development is widely accepted would suggest that this theory does contain some truth. This however is not always the case as history dictates that psychological research is open to interpretation towards the creation of certain ideals. There is also contrary evidence, that it is not actually the direct love and attention given by the mother that is beneficial for future development but that it is the stimulation that the mother through showing love provides and that this stimulation can be provided by others such as the father or peers. More evidence that stimulation is important for development comes from Goldfarb who found the longer a child stays in institutionalised care, the more behind they are in virtually all aspects of development. It can therefore be suggested that although the formation of a strong relationship with the mother is important not least for survival and protection for development to exist, this does not necessarily have to come from the natural mother and is also influenced by others, the child's temperament and reactions to given stimuli. ...read more.