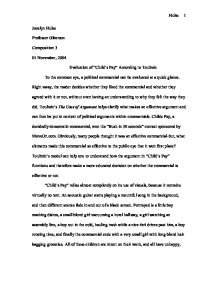 Jocelyn Hulse Professor Giberson Composition 3 01 November, 2004 Evaluation of "Child's Pay" According to Toulmin To the common eye, a political commercial can be evaluated at a quick glance. Right away, the reader decides whether they liked the commercial and whether they agreed with it or not, without even having an understanding to why they felt the way they did. Toulmin's The Uses of Argument helps clarify what makes an effective argument and can then be put in context of political arguments within commercials. Childs Pay, a decidedly democratic commercial, won the "Bush in 30 seconds" contest sponsored by MoveOn.com. Obviously, many people thought it was an effective commercial-but, what elements made this commercial so effective to the public eye that it won first place? Toulmin's model can help one to understand how the argument in "Child's Pay" functions and therefore make a more educated decision on whether the commercial is effective or not. "Child's Pay" relies almost completely on its use of visuals, because it contains virtually no text. An acoustic guitar starts playing a mournful song in the background, and then different scenes fade in and out of a black screen. Portrayed is a little boy washing dishes, a small blond girl vacuuming a hotel hallway, a girl watching an assembly line, a boy out ...read more.

The largest issue of concern is the amount of deficit claimed in "Child's Pay." The amount that was claimed, 1 trillion dollars, turned out to be an exaggeration. The federal deficit for the year 2004 is much closer to 500 billion dollars. There are slight discrepancies, between the Office of Management and Budget, which claimed the accurate deficit 521 billion dollars, and the Congressional Budget Office, which claimed the deficit to be 477 billion dollars. (How Stuff Works) However, these numbers are only half of what "Child's Pay" was claiming the deficit to be. This inaccuracy makes the argument much less credible. One point though, is that even though the deficit number was exaggerated, the 500 billion dollars that is our deficit is one of the largest numbers in history. During Bill Clinton's time in office, there was a surplus for the United States, in place of the deficit. In 1999, the surplus was 129 billion dollars, and in the year 2000 the surplus spiked at 236 billion dollars. (How Stuff Works) After that, when George Bush took office, the surplus ended and the country's financial situation declined into a deficit. The only other deficit as large as what it is now was in 1945, with a deficit of 456 billion dollars. ...read more.

The implied claim of the argument in "Child's Pay" was that children were going to pay off the trillion dollar deficit that George Bush created really has no data to back it up, except for the fact that George Bush did in fact dig the United States into debt from the last president's surplus. Using Toulmin as a model that determines one must have "Grounds" for the argument; "Child's Pay" really is not a "good" advertisement. So, then why did Child's Pay" win the contest, not only by the panel of judges, but also the people's popularity vote? It won because of its clear, higher tech production. '"Child's Pay" has excellent production values-it's by far the slickest of the 14 finalists.' It has the ability to evoke an emotional response using the moody music and forlorn looking children, and its ability to convey a harsh portrayal of the president without lecturing. "Perhaps the MoveOn folks, in a surprisingly savvy move, chose gentle persuasion over rallying the base. Perhaps they feared that a low-budget, preach-to-the-choir ad would make them look like fringe amateurs, instead of the power players they long to be." (Not So Amature) While the advertisement was popular and well made, according to Toulmin, it really lacks the substantial data that would support the claim. ...read more.