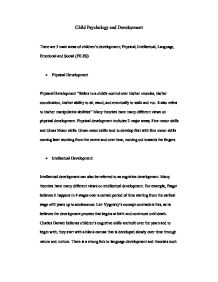 Child Psychology and Development There are 5 main areas of children's development; Physical, Intellectual, Language, Emotional and Social (PILES) * Physical Development Physical Development "Refers to a child's control over his/her muscles, his/her coordination, his/her ability to sit, stand, and eventually to walk and run. It also refers to his/her manipulative abilities" Many theorists have many different views on physical development. Physical development includes 2 major areas; Fine motor skills and Gross Motor skills. Gross motor skills tend to develop first with fine motor skills coming later working from the centre and over time, moving out towards the fingers. * Intellectual Development Intellectual development can also be referred to as cognitive development. Many theorists have many different views on intellectual development. For example, Piaget believes it happens in 4 stages over a certain period of time starting from the earliest stage of 0 years up to adolescence. Lev Vygotsky's concept contradicts this, as he believes the development process that begins at birth and continues until death. Charles Darwin believes children's cognitive skills are built over the years and to begin with, they start with a blank canvas that is developed slowly over time through nature and nurture. ...read more.

* Emotional Development This is very much linked into social development. From a very early age it is important for children to feel socially accepted and emotionally stable. Young children, especially babies need a bond with a person in order to effectively develop. John Bowlby devised the theory of Attachment. Theorists also believe young children go through stages of anxiety and separation especially seen in very young children when separated from carers and loved ones Theories to explain Child Development There are many theoretical approaches to children's development. Social Constructivists Approach The first approach to child development is the social constructivist's view. Social constructivists view learning as a social process. Examples of social constructivists are Bruner, Vygotsky and Bandura. Vygotsky developed the concept of the ZPD or Zone of Proximal Learning. The ZPD is the difference between what a child can do with help and what he or she can do without guidance. (Vygotsky, L. S. 1978) "He observed that when children were tested on tasks on their own, they rarely did as well as when they were working in collaboration with an adult" (http://www.ncrel.org). ...read more.

Watson Watson's work was based on the experiments of Ivan Pavlov, who had studied animals' responses to conditioning. In Pavlov's best-known experiment, he rang a bell as he fed dogs several meals. Each time the dogs heard the bell they knew that a meal was coming. This caused them to salivate. Pavlov then rang the bell without bringing food, but the dogs still salivated. They had been "conditioned" to salivate at the sound of a bell. Pavlov believed that humans react to stimuli in the same way. Skinner developed the theory of "operant conditioning," the idea that we behave the way we do because this kind of behaviour has had certain consequences in the past. There are two types of conditioning: Classic conditioning - This occurs when a natural reflex responds to a stimulus. The most popular example is Pavlov's observation as mentioned above. Operant conditioning - This occurs when a response to a stimulus is reinforced. If a reward or reinforcement follows the response to a stimulus, then the response becomes more probable in the future. B.F. Skinner used reinforcement techniques to get rats in a cage to press a lever, which in turn, then released food pellets. "A behaviour followed by a reinforcing stimulus results in an increased probability of that behaviour occurring in the future" (B.F. Skinner www.bfskinner.org) ...read more.