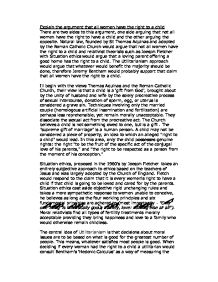 working principles and six fundamental principles are adhered to (most importantly - "Only one 'thing' is intrinsically good; namely, love: nothing else at all"). Moral relativists find all types of fertility treatments morally acceptable providing they bring happiness and love to a family who would otherwise remain childless. The central idea of Utilitarianism is that decisions about moral issues are to be based on what is good for the greatest number of people. This means, whatever satisfies most people is good. When deciding if every woman had the right to a child a utilitarian would consult Bentham's 'Hedonic Calculus' as a way of measuring the pleasure derived from providing a childless woman with a child. The Hedonic Calculus can be applied to the statement that all women have the right to a child (assuming the mother isn't a child abuser! 1) The intensity of the pleasure or pain. - Several hours of labour would no doubt be painful for the mother, but the intensity of pleasure derived would be far greater. ...read more.

about, I believe that having a child for any sort of personal or financial gain where the interests of the child come second is wrong. I believe that mentally unstable parents who could possibly physically harm their child also do not have the right to one. The Roman Catholic Church believes a child is not something owed to one, but is a gift. The "supreme gift of marriage" is a human person. A child may not be considered a piece of property, an idea to which an alleged "right to a child" would lead. In this area, only the child possesses genuine rights: the right "to be the fruit of the specific act of the conjugal love of his parents," and "the right to be respected as a person from the moment of his conception." To a certain extent, although I am an atheist I support the view of the church when they say that a child may not be considered a piece of property, but I feel that loving parents have an absolute right to a child, even if the parent is single they shouldn't be discriminated against. ...read more.