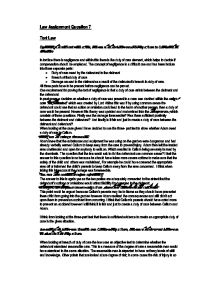 Explaining the relevant rules of law, discuss whether Adam owed a duty of care to Callum in this situation.

I think from looking at the three-part test that there is sufficient evidence to create an appropriate duty of care in the given situation. Assuming that Adam was found to owe Callum a duty of care, discuss whether or not Adam was in breach of that duty of care. When looking at breach of duty of care the law uses an objective test to determine whether the defendant exercised reasonable care. This is a measure of the degree of care a reasonable man would have exercised in the same situation. The reasonable man is expected to have ordinary levels of skill and knowledge. Other points that are looked at are degree of risk; in some cases the risk of injury is so small that judges give some flexibility. Seriousness of potential harm, if the potential harm or injury is very serious, individuals or companies must exercise considerable care to avoid liability for accidents. Cost of precaution, times when trying to completely solve a problem would result in costs outweighing any potential benefits. I think in the case given that Adam would be liable for breach of duty of care as the seriousness of potential harm was a high risk and there was a suitable degree of risk. ...read more.

Callum could either recover damages for his injuries, or the court could rule that his injuries were too remote. Explain the rules on remoteness of damages and apply those rules to the facts of this case. Remoteness is when the court decides if the victim's damages were reasonably foreseeable. In some cases series of events can be so obscure and unpredictable that they would be seen to unconventional to be reasonably foreseeable. The case of Adam and Callum could be linked to that of Hughes v Lord Advocate (1963) in this case workmen left an open manhole unattended which was lit with paraffin lamps a ten-year-old boy who was playing near by knocked a lamp into the manhole causing an explosion in which he was seriously burned. The court took the position that it was foreseeable that the lamps might burn a child, even if the unusual sequence of events, which actually caused the burns, could not have been easily predicted. Hughes was awarded damages. When relating it to the case given it is very similar. Adam left the treated ground unattended and Callum went out to play. Callum a six-year-old boy fell into the treated area causing him to develop severe burns on his hand. The case is so similar that the results would more that likely be the same. I think that the damages were more than reasonably foreseeable. ...read more.