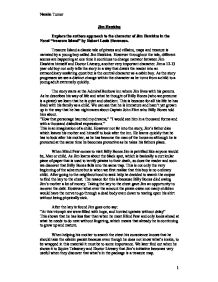 Explore the authors approach to the character of Jim Hawkins in the Novel &quot;treasure Island&quot; by Robert Louis Stevenson.

Jim Hawkins Explore the authors approach to the character of Jim Hawkins in the Novel "treasure Island" by Robert Louis Stevenson. Treasure Island a classic tale of pirates and villains, maps and treasure is narrated by a young boy called Jim Hawkins. However throughout the tale, different scenes are happening at one time it continues to change narrator between Jim Hawkins himself and Doctor Livesey, another very important character. Jim a 12-13 year old boy not only tells the story in a way that draws the reader into an extraordinary seafaring quest but is the central character as a cabin boy. As the story progresses we see a distinct change within the character as he turns from a child to a young adult extremely quickly. The story starts at the Admiral Benbow inn where Jim lives with his parents. As he describes his way of life and what he thought of Billy Bones (who we presume is a pirate) we learn that he is quiet and obedient. This is because for all his life he has lived with his family as a child. We can see that he is immature and hasn't yet grown up in the way that he has nightmares about Captain John Flint who Billy Bones told him about. ...read more.

At this point some may say he regressed and goes back to his childlike behaviour like at the beginning of the story. Nevertheless, I believe however old a man would he too would be just as afraid of Silver and his crew as Jim was. What ever you think of Jim here within the next chapter he shows that because of his increasing maturity and cleverness he becomes crafty with the information he has just overheard and decides that even though he trusts the doctor the most he will tell Squire Trelawney about Silvers plans. This is probably due to the fact that he is the one in charge and therefore the one who's most likely to know what to do. Once they were all down below deck: "I did as I was bid, and as short as I could make it, I told the whole details of Silvers conversation" Within this time he suddenly got a lot more responsibility on his shoulders, one reason being that he was treated like a man, as a child would not have been heard. It was also all because of Jim that their lives might be saved. Therefore they asked him to sit down to join them whilst drinking wine and eating raisins, yet another adult activity to do in which at this point not only the three men but also the readers forget that he is only 12-13 years of age. ...read more.

them why he couldn't be killed: "It was I who cut her cable, and it was I that killed the men you had aboard of her, and it was I who brought her where you'll never see her no more, not one of you." From this point onwards Jim Hawkins was the one on top. No one could kill him as that would mean that they would be stranded on the island forever and John Silver the only pirate who had enough brains decided to betray his crew for his own life and turn back into an honest man, for the time being anyway. This magnificent adventure wouldn't have ended in the glorious way it did if it wasn't for the 12-13 year old cabin boy. He may be only a child with an adventurous mind of one but without this none of the honest men on bored the Hispaniola would have survived let alone got the treasure. Because of his increasing maturity, cleverness and initiative he becomes the hero of the tale without once boasting about it and dwelling on his huge achievements. Instead simply telling a story from a young child's point of view who has had to grow up extremely quickly to not only save his life but to save his mothers and the loyal crews. Natalie Turner 1 ...read more.