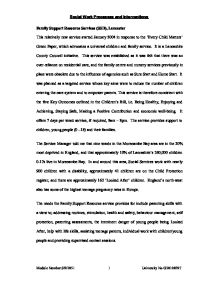 Family Support Resource Services (SSD), Lancaster This relatively new service started January 2004 in response to the 'Every Child Matters' Green Paper, which advocates a universal children and family service. It is a Lancashire County Council initiative. This service was established as it was felt that there was an over-reliance on residential care, and the family centre and nursery services previously in place were obsolete due to the influence of agencies such as Sure Start and Home Start. It was planned as a targeted service whose key aims were to reduce the number of children entering the care system and to empower parents. This service is therefore consistent with the five Key Outcomes outlined in the Children's Bill, i.e. Being Healthy, Enjoying and Achieving, Staying Safe, Making a Positive Contribution and economic well-being. It offers 7 days per week service, if required, 8am - 8pm. The service provides support to children, young people (0 -18) and their families. The Service Manager told me that nine wards in the Morecambe Bay area are in the 20% most deprived in England, and that approximately 10% of Lancashire's 260,000 children 0-17s live in Morecambe Bay. In and around this area, Social Services work with nearly 900 children with a disability, approximately 41 children are on the Child Protection register, and there are approximately 162 'Looked After' children. England's north-west also has some of the highest teenage pregnancy rates in Europe. The needs the Family Support Resource service provides for include parenting skills with a view to; addressing routines, stimulation, health and safety, behaviour management, self protection, parenting assessments, the imminent danger of young people being Looked After, help with life skills, assisting teenage parents, individual work with children/young people and providing supervised contact sessions. These needs are addressed by individual work in the Centre, family homes and other settings, Co-Working on a multi-agency basis, and specific groups and courses to address particular needs, e.g. ...read more.

However Tommy's mother was found to be in bed during many of the sessions. The father explained that his wife was sleeping throughout the day as Tommy was keeping them up at night. I explained to Dad that I understood mum was exhausted but that it would be more appropriate for her to be present on the next visit. I ascertained Dad's permission to ring around the various agencies to gather more information on Tommy, and to ascertain the stage of the referral to the Childs, Adolescent Mental Health Team. On the subsequent visit mum was out of bed but appeared very wary of myself. I explained that I was working under Section 17 CA 1989 which encourages the local authority to provide a range of services for Children in Need and that as far as it is consistent with that aim promote their upbringing by their families. Mum seemed relieved with this and voiced her concerns that the children may be removed as with her previous children, and that she had felt we were intervening with the goal of removing Tommy and Jenny from her care. This I felt was an example of Carl Roger's client-centred therapy which has the central belief that as stated in Trevithick (2000) that: individuals know more about themselves and their lives than anyone else and, because of this, are in the best position to deal with personal problems that emerge. (p.33) The role of the practitioner is to create the conditions necessary for people to find their way to a new self-concept and self-regard. Tommy's mother had obviously been having negative feelings about working with Social Services due to the previous history but by being informed of the legal framework in which we were working this put her into a new position whereby she was working with the agency on a voluntary basis, not under the Child Protection umbrella. ...read more.

Theses could have been monitored more closely by undertaking direct work with Tommy, alongside sessions with his parents. I feel by sharing the review report with the service user and explaining this in clear understandable terms enables them to be involved fully in the review system. I believe that this encourages working in partnership with the parents and other agencies. This is a transferable skill that could be used in all the different practice settings. Closure should be sensitive with all the parties being involved being informed. Tommy's parents rightly needed closure as this would enable them to achieve self-actualization, as discussed in Maslow's hierarchy of needs; cited in Trevithick (2000): The need to develop abilities and to use skills to the full; to find self- fulfilment p.32 Trevithick (2000) went onto explain that this has important implication for our work because by providing the right kind of support we could 'release the momentum and motivation towards self- sufficiency and independence' which she called 'self-actualization' (p.33). This skill can be further enhanced whilst working with other service users. The Family Resource Service was set up as a universal service across Lancashire County Council, which covers a vast area including areas of deprivation such as East Lancashire. These areas have large and pro-active Sure Start programs operating in and around the area. However, I personally feel that not enough consideration has gone into the Morecambe Bay Area. The Sure Start program operates only in the Skerton ward - which is very small in comparison to the Morecambe Bay area. Ideally I would have liked to introduce Tommy and his family to some Network in the local community; in reality there was no agency to refer them to. The rural areas seemed to be very much neglected in this regard and it poses the question "are there no children in need living in rural areas?" As a practitioner I feel that there should be an awareness of these dilemmas whilst working in a rural community and ensure that the system does not oppress those with whom we work. ...read more.