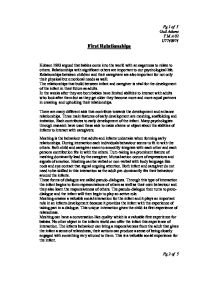 Pg 1 of 5 Gail Adams T.M.A 02 U7740974 First Relationships Hobson 1993 argued that babies come into the world with an eagerness to relate to others. Relationships with significant others are important to our psychological life. Relationships between children and their caregivers are also important for not only their physical but emotional needs as well. The relationships that build between infant and caregiver is vital for the development of the infant in their future as adults. In the weeks after they are born babies have limited abilities to interact with adults who look after them but as they get older they become more and more equal partners in creating and upholding their relationships. There are many different aids that contribute towards the development and enhance relationships. Three main features of early development are meshing, scaffolding and imitation. Each contributes to early development of the infant. Many psychologists through research have used these aids to make claims or object about the abilities of infants to interact with caregivers. Meshing is the behaviour that adults and infants undertake when forming early relationships. During interaction each individuals behaviour seems to fit in with the others. Both child and caregiver seem to smoothly integrate with each other and each persons contribution fits in with the others. Turn-taking is a prominent feature of meshing dominantly lead by the caregiver. Mutual action occurs of expressions and signals of emotion. Meshing can be verbal or non-verbal with body language like nods and eye contact that signal ongoing attention. ...read more.

Bruner described scaffolding as a way of interacting with an infant to allow the child to take an active role as he/she learns. Bruner went on to form joint action formats, where the mother creates simplified sequences of actions with objects that are repeated thus the infant learns. Scaffolding is a constructivist theory because it involves the child and the environment in its physical and social sense. The caregiver implements objects for the child to interact with and respond to. Pg 3 of 5 Gail Adams T.M.A 02 U7740974 Lev.S. Vygosky (1896-1934) had a theory that relied heavily upon the social environments influence, he emphasised its role and believed that society was crucial to human cognitive development, beginning with the first interactions and relationships. He argued that humans developed psychological tools to aid their own thinking and behaviour. Children were seen as actively organising their own thought processes through constant interaction with the social world. The child had a zone of proximal development which could only be gained by the support of an adult. Vygosky's theory showed an interaction between the natural line that emerges within a child and the cultural line known as socio-scaffolding. Piaget argued that not only the environment but the physical and social plays a greater role rather than simply triggering innate structures. 'The human being is immersed right from birth into a social environment which affects him just as much as his physical environment. ...read more.

Basic patterns of actions, which he called sensorimotor schemes.' (Open University BK1, CHP1,pg31 1994). Some key features of first relationships are meshing, scaffolding and imitation. All have their own endeavours in development-social interaction, interaction with the environment and language development. All incorporate the main caregiver as tutor until the infant can be able to take an active role at which point the development becomes a cooperation. Relationships cannot simply be learnt by experiencing meshing, imitation and scaffolding singly yet more so the infant must go through all processes in stages as suggested by Piaget Transactional Model of Development (BK1,CHP6) the child has an active role in their own development. The infant passes through these processes imitation being of pseudo-dialogue and then to proto-dialogue, Travarthen inter-subjectivity to scaffolding/zone proximal development. Mother and infant need to be harmonized to enter these stages of primary subjectivity. The four main theories of child development can be seen in all processes and is apparent more so in some than others, but certainly an overlap of many theories can be seen throughout. Each theory focuses on different aspects of development and makes different assumptions about the relative importance of internal and external influences. The implications for the theories is that of the lack for the theories to concretise a transactional model of development to enrol in the appreciation that the child needs to be and play an active role in their own development, with the support network from a primary caregiver. Word count 1921 Pg 5 of 5 Gail Adams T.M. ...read more.