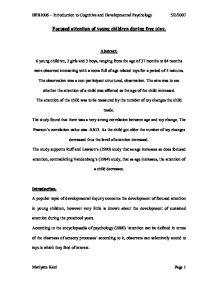 Focused attention of young children during free play. Abstract. 6 young children, 3 girls and 3 boys, ranging from the age of 37 months to 84 months were observed interacting with a room full of age related toys for a period of 5 minutes. The observation was a non-participant structured, observation. The aim was to see whether the attention of a child was affected as the age of the child increased. The attention of the child was to be measured by the number of toy changes the child made. The study found that there was a very strong correlation between age and toy change. The Pearson's correlation value was -0.813. As the child got older the number of toy changes decreased thus the level of attention increased. The study supports Ruff and Lawson's (1990) study that as age increases so does focused attention, contradicting Vandenberg's (1984) study, that as age increases, the attention of a child decreases. Introduction. A popular topic of developmental inquiry concerns the development of focused attention in young children, however very little is known about the development of sustained attention during the preschool years. According to the encyclopaedia of psychology (2000) 'attention can be defined in terms of the clearness of sensory processes' according to it, observers can selectively attend to inputs which they find of interest. The attention of infants is sometimes known as voluntary or captured, certain aspects of the environment are seen to demand attention. ...read more.

The participants were lecturers children and were selected as a convenience sample. In the room with the child the mother and the camera person was present. Apparatus and Material. The apparatus that was used was Observer Pro, where the video clips of the 6 children was viewed. The SPSS package was also used to produce the graphs and results. The results were recorded on a data sheet, which is labeled as appendix 1. Procedure. Before the experiment was conducted, we were given the introduction of the study. We were told of the two contradicting studies of Ruff and Lawson (1990), and Vandenberg (1984). We were then told that the aim of this experiment was to see if the age of young children was related to the attention they gave to toys. We were told that this would be done by counting the number of toy changes a child made in a 5 minute period. Before carrying out the actual observations we were asked to view a practice video clip on Observer Pro of a child interacting with a room full of toys. The reason this was done was because we needed to come up with a definition of what constitutes to a change. We used an inter-observer reliability check where, in a group of four we came up with a definition of what was classed as a toy change. The definition is on the data sheet in appendix 1. ...read more.

The results also support Krakow's (1987) study that as the child got older their attention span increased. The results contradicted Vandenberg's study. The Pearson's r value for the test was 0.813 showing that there was a very strong correlation. Also the p value was less than the alpha level showing a very strong reliability. The definition of what constitutes to a toy change was also very good as we had a very strong correlation for the inter observer reliability tests with a the significance level well below the alpha level. Although the study showed strong reliability there are a few limitations of the study. One of the main limitations is that the study cannot be ecologically valid. The study conducted was conducted in a controlled environment and in a new setting to the child. Although this method reduces extraneous results the child could have behaved differently to what they normally do as they are not used to the environment they were in. Also there was a stranger present in the room with the child and this could have caused the child to act differently than they normally do. Also the sample chosen was a very small sample, there were only 6 participants which are not enough to get representative results. If the study was to be replicated more participants would be needed to produce a more reliable result. Overall it was found that this study supports Ruff and Lawson's study that as the child got older, the focussed attention of the child increased. ...read more.