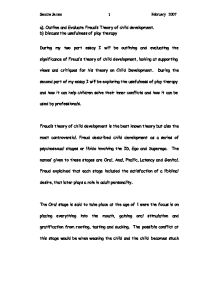 a). Outline and Evaluate Freud's Theory of child development. b) Discuss the usefulness of play therapy During my two part essay I will be outlining and evaluating the significance of Freud's theory of child development, looking at supporting views and critiques for his theory on Child Development. During the second part of my essay I will be exploring the usefulness of play therapy and how it can help children solve their inner conflicts and how it can be used by professionals. Freud's theory of child development is the best known theory but also the most controversial. Freud described child development as a series of psychosexual stages or libido involving the ID, Ego and Superego. The names' given to these stages are Oral, Anal, Phallic, Latency and Genital. Freud explained that each stage included the satisfaction of a libidinal desire, that later plays a role in adult personality. The Oral stage is said to take place at the age of 1 were the focus is on placing everything into the mouth, gaining oral stimulation and gratification from rooting, tasting and sucking. The possible conflict at this stage would be when weaning the child and the child becomes stuck not wanting to move onto the next stage this is called fixation, which leaves the child focused and unable to move to the next stage. ...read more.

(Hans Eysenck) Critics of Freud argue that his theories are unreliable as they are not scientific and that he was selective with the data recorded. It was said that Freud's notes were after therapy sessions not during, so they were retrospective. Another retrospective issue is that Freud asked adults about their childhood. Freud's theories on libido are impossible to measure therefore cannot be tested or be considered scientific. Karl Popper also criticized Freud's theories as not being real science as scientific theories must be falsifiable. Popper argued that no experiment or observation could ever falsify Freud's theories of the Oedipus complex as if someone denied the complex it is interpreted as repression and therefore could not be considered scientific. Another Critique Dr. Von Schneidt suggested that most of Freud's psychoanalytical theories where a by-product of his cocaine use which would enhance dopaminergic neurotransmission increasing sexual interest and obsessive thinking as well as having unresolved issues within the Oedipus complex. There is no reason to assume that his 'insights' into his suffering are in any way relevant to assume that his 'insights' are in fact accurate. Evidence would be required to prove this, and this is precisely what is missing. (Hans Eysenck) b) Discuss the usefulness of play therapy Whilst looking at the usefulness of play therapy I will look to explain the reasons why therapy may be sought for children and what positive impact this can have their lives. ...read more.

Therapists would use gentle probing questing asking "where do you sleep?", "where does mummy sleep?", where does daddy?" or "uncle Fred sleep?", again letting the child take the lead and often waiting months or even never for this information. This information may be used in a child abuse case. Another case for play therapy would be emotional hurt or lack of emotions and love like in the case of Dibs 'In search of self', a book written by Virgina Axline. This book refers to a little boy who was starved or love and emotion by his professional mother and father and was considered retarded because of his lack of inclusion at home and school with peers, family and teachers, however through play Dibs found himself, by acting out his frustrations with his father through symbolic play with dolls whilst discovering himself. Play therapy is recognised as a very successful way of accessing a child's mind and experiences in a way that deals with their unconscious, in an innocent and unobtrusive way. Unknowingly to the child it gradually releases them of their pain or experience of life, as they learn to express there speech and explanation in other symbolic ways. This is done in a way that is manageable to them, and at a pace that the child can cope with as well as enabling them to develop themselves at the same. ...read more.