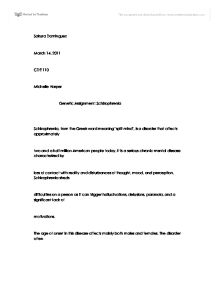 Sakura Dominguez March 14, 2011 CDE 110 Michelle Harper Genetic Assignment: Schizophrenia Schizophrenia, from the Greek word meaning "split mind", is a disorder that affects approximately two and a half million American people today. It is a serious chronic mental disease characterized by loss of contact with reality and disturbances of thought, mood, and perception. Schizophrenia sheds difficulties on a person as it can trigger hallucinations, delusions, paranoia, and a significant lack of motivations. The age of onset in this disease affects mainly both males and females. The disorder often appears in males first, usually in the late teens or early twenties, than in women, generally affected in the early twenties to early thirties. ...read more.

People with schizophrenia have a chemical imbalance within them; this means that the person diagnosed have either very sensitive to or produce an excessive amount of dopamine (neurotrans- mitters). The imbalance of this chemical can affect the way a person's brain may react to stimuli. As for the environmental factors involved, more and more research is pointing to stress, either during pregnancy or at a later stage of development. High levels of stress are believed to trigger Schizo- phrenia by increasing the body's production of the hormone cortisol. Some stress inducing environ- mental factors include prenatal exposure to a viral infection, low oxygen levels during birth, early parental loss or separation and physical or sexual abuse. ...read more.

People with schizophrenia isolate themselves, start neglecting their appearance, say peculiar things, and show a general indifference in life. It can disrupt goal-directed activity, causing impairments in a person's ability to take care of him or herself, work, have friends, and interact with others. They may also abandon hobbies and activities, and their performances at work or school deteriorates. Schizophrenia is a disorder of the psychosis that makes it difficult to differentiate between what's a real or unreal experience, to think logically, to have normal emotional response, and to behave normally in social situations. With medication, therapy, and a strong support network, many people with Schizophrenia are able to improve control of their symptoms, in greater independence and lead fulfilling lives. ...read more.