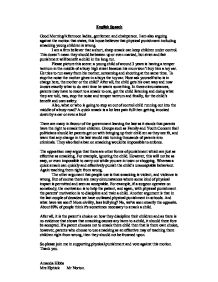 Good Morning/Afternoon ladies, gentlemen and chairperson. I am also arguing against the motion that states, this house believes that physical punishment including smacking young children is wrong.

English Speech Good Morning/Afternoon ladies, gentlemen and chairperson. I am also arguing against the motion that states, this house believes that physical punishment including smacking young children is wrong. I am a firm believer that a short, sharp smack can keep children under control. This doesn't mean they should be beaten up or even marked, but strict and fair punishment will benefit a child in the long run. Please picture this scene: a young child of around 3 years is having a temper tantrum in the middle of a busy high street because his mum won't buy him a toy car. He tries to run away from his mother, screaming and shouting at the same time. ...read more.

A quick smack is a lot less pain full then getting knocked down by a car or even a bus! There are many in favour of the government leaving the law as it stands that parents have the right to smack their children. Groups such as Family and Youth Concern feel politicians should let parents get on with bringing up their children as they see fit, and warn that any change in the law would risk turning thousands of parents into criminals. They also feel a ban on smacking would be impossible to enforce. The opposition may argue that there are other forms of punishment which are just as effective as smacking. For example, ignoring the child. However, this will not be as easy, or even impossible to carry out while you are in town or shopping. ...read more.

Another argument is that in the last couple of decades we have outlawed physical punishment in schools. And what have we seen? More civility, less bullying? No, we've seen exactly the opposite. About 89% of people think it's sometimes necessary to smack a child. After all, it is the parent's choice on how they discipline their children and as there is no evidence that shows that smacking causes any harm to a child, it should there fore be accepted. If a parent chooses not to smack there child then that is there own choice, however, parents who choose to use smacking as an effective may of teaching there children right from wrong, then they should not be frowned upon. So please join me in supporting physical punishment and vote against this motion. Thank you. Amanda Hibbs Mrs Elphick Mr Norton. ...read more.