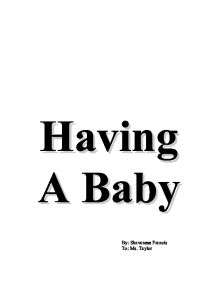 Having A Baby By: Shavanese Francis To: Ms. Taylor Tuesday, June 11, 2002 My Child If I were to have child there would be basic principles that I would have taught him/her at an early age. There would also be certain values, style, expectations and roles that I would expect them to portray as an adult with the challenges of raising kids of their own. The basic values would include having respect for themselves and others, have some sort of religious believe, value love, honesty, value loyalty, family and friends. Having respect will enable them to get respect from others and people will always look out for you, protect you if they are able to. If you have a religious believe you will find yourself, because religions provide you with rules and expectations you must follow and you will be able to commit. I would want them to value love because love is the greatest healer and with love they will be able to heal any scar. ...read more.

I would expect my kids to be attentive to the feelings of other and to realize that when they have done something wrong they should apologize even if it means hurting their pride. I would also expect them show respect to even those who don't respect them because "good will shall follow" meaning people will always respect you and they will always get by in life. Partners From A Different Background Raising a Child together Two persons from different cultural background can have different parenting styles this can be seen as cultural differences. Social backgrounds, family influences and the languages we speak can be some of the difficulties one can find in a relationship of two people from different backgrounds. The social background that I was brought up in is different from my partners. And due to the fact that there were certain principles that I learned, for example in my culture you would shake someone's hand to show respect when greeting others however, my husband came from culture where men were not expected to shake hands with girls if they were unmarried. ...read more.

And when our child told them that he chooses to follow both culture they found him not to be loyal and that he betrayed their family and disowned my husband and my child. I believe that children from two cultural back rounds learn to appreciate things and people more. Seeing that our child was from a mixed cultural background he was fortunate to learn two different languages however, he spoke my language most of the time because I was around more that my husband. Raising our child with two different views and cultural backgrounds was hard because in my culture kids were able to stay out as late as they wanted and in my husband's culture you were expected to be in by 12 pm so I had to compromise with my husband for a 1:00am curfew. Just remember that raising kids with someone of a different cultural background you have to learn to compromise. By: Shavanese Francis To: Ms. Taylor ...read more.