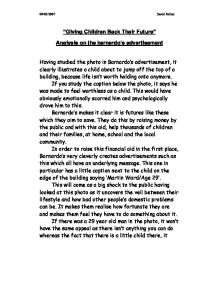 Having studied the photo in Barnardo's advertisement, it clearly illustrates a child about to jump off the top of a building, because life isn't worth holding onto anymore.

"Giving Children Back Their Future" Analysis on the barnardo's advertisement Having studied the photo in Barnardo's advertisement, it clearly illustrates a child about to jump off the top of a building, because life isn't worth holding onto anymore. If you study the caption below the photo, it says he was made to feel worthless as a child. This would have obviously emotionally scarred him and psychologically drove him to this. Barnardo's makes it clear it is futures like these which they aim to save. They do this by raising money by the public and with this aid, help thousands of children and their families, at home, school and the local community. ...read more.

It makes them realise how fortunate they are and makes them feel they have to do something about it. If there was a 29 year old man in the photo, it won't have the same appeal as there isn't anything you can do whereas the fact that there is a little child there, it makes you think there's still time to do something about it to change his future. Barnardo's very carefully takes the shot in the way that it's pointing down diagonally towards the child, being the focal point. This is to show just how high up he is which effectively emphasises the sheer drop that is before him. ...read more.

This has been achieved by CGI technology. In terms of props, the baby is wearing very large clothes. His t-shirt for instance is reaching his wrist and his shorts are nearly by his ankles. It is as if he's wearing a 29 year olds clothes which makes this photo even more distressing. Also, if you compare the child with the baby in Barnardo's logo, they are in complete contrast with each other. The baby in the logo is obviously having great fun and as the support of two adults, both physically and metaphorically whereas the child in the photo has no support at all. This shows that words can't describe what he must have been through to think that jumping of the building is the better way through all this. ?? ?? ?? ?? 09/05/2007 David Pollon ...read more.