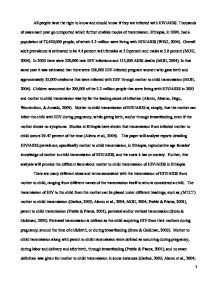 All people have the right to know and should know if they are infected with HIV/AIDS. Thousands of cases each year go unreported which further enables modes of transmission. Ethiopia, in 2004, had a population of 72,420,000 people, of which 2.2 million were living with HIV/AIDS (WHO, 2004). Overall adult prevalence is estimated to be 4.4 percent with females at 5.0 percent and males at 3.8 percent (MOH, 2004). In 2003 there were 220,000 new HIV infections and 115,000 AIDS deaths (MOH, 2004). In that same year it was estimated that there were 128,000 HIV-infected pregnant women who gave birth and approximately 35,000 newborns that were infected with HIV through mother to child transmission (MOH, 2004). Children accounted for 200,000 of the 2.2 million people that were living with HIV/AIDS in 2003 and mother to child transmission was by far the leading cause of infection (Alemu, Abseno, Degu, Wondmikun, & Amsalu, 2004). Mother to child transmission of HIV/AIDS is, simply, that the mother can infect the child with HIV during pregnancy, while giving birth, and/or through breastfeeding, even if the mother shows no symptoms. Studies in Ethiopia have shown that transmission from infected mother to child occurs 29-47 percent of the time (Alemu et al., 2004). ...read more.

In addition, it was claimed that if the prevalence of HIV in a group of childbearing women is high enough, 15 to 20 percent, an antenatal or after birth, HIV screening program can even save money for the health care system and assist in decreasing HIV infections in children (Stoto & Goldman, 2003). Other claims include that reduction of MTCT of HIV can be reduced significantly with the use of medications, through increased knowledge about prevention and care (Alemu et al., 2004; Garbus, 2003; Preble & Piwoz, 2001; Stoto & Goldman, 2003). These claims are not answered directly in all cases, but the conclusions found are representative. The major conclusions and findings from these publications have many similarities and a few differences. Overall, the researchers concluded that there are effective and practical strategies to prevent loss of life due to HIV infection in children including, HIV positive pregnant women being treated with a simple course of antiretroviral drugs before, during, and after birth (Alemu et al., 2004; Garbus, 2003; Preble & Piwoz, 2001; Stoto & Goldman, 2003). In addition, affected infants can be treated, and alternatives to breastfeeding can also reduce the rate of transmission (Stoto & Goldman, 2003; WHO, 2002). ...read more.

This is important because we need to not only focus on preventing transmission after the mother is pregnant, but also on informing the potential mothers about the dangers of becoming pregnant if they are HIV positive. This is only one mode of transmission, but it is considered to account for 20-25 percent of new infections, so focusing attention on this can assist in raising the societal and economical levels back to where they should be. More infections create more people needing to use health services and treatment of AIDS is more expensive than other health treatments. In addition, it is hard to work when you are infected so you loose money. Families that have members that are infected with HIV/AIDS generally make less money and spend more on treatments and healthcare than the health families. In summary, to ensure that our campaign is successful and reaches the most people possible we have to consider all avenues available. I suggest that we focus on finding ways to provide knowledge through interventions and try and alleviate the stigma that is involved with the disease. If we can make them feel comfortable about the situation they are in and provide them with the right knowledge and resources a decrease in MTCT of HIV will be noticeably reduced. ...read more.