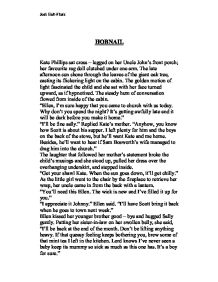 HOBNAIL Kate Phillips sat cross - legged on her Uncle John's front porch; her favourite rag doll clutched under one arm. The late afternoon sun shone through the leaves of the giant oak tree, casting its flickering light on the cabin. The golden motion of light fascinated the child and she sat with her face turned upward, as if hypnotized. The steady hum of conversation flowed from inside of the cabin. "Ellen, I'm sure happy that you came to church with us today. Why don't you spend the night? It's getting awfully late and it will be dark before you make it home." "I'll be fine sally." Replied Kate's mother. "Anyhow, you know how Scott is about his supper. I left plenty for him and the boys on the back of the stove, but he'll want Kate and me home. Besides, he'll want to hear if Sam Bosworth's wife managed to drag him into the church." The laughter that followed her mother's statement broke the child's musings and she stood up, pulled her dress over the overhanging underskirt, and stepped inside. "Get your shawl Kate. When the sun goes down, it'll get chilly." ...read more.

He was in a faraway place called Cuba, fighting for a man called Roosevelt. She wondered what kind of place Cuba was, and if it was anything like home. The sun's last rays were sinking behind the tree-studded mountains. Shadows rose ominously from the dense woods on both sides of the track. Rustling sounds from the brush caused Kate to jump, but her mother's soothing voice calmed her fears. "It's all right Child; just foxes and possums." A hoot owl's mournful cry floated out of the encroaching darkness and Kate tightened her grip on her mother's hand. Finally, night enveloped the landscape, and all that could be seen was the warm glow of the lantern and the shadow of the figures behind it. It was a moonless night, and the faint glow of a few stars faded in between the moving clouds. Kate tripped over the chunks of gravel scattered between the ties and Ellen realized that her daughter was tired. "We'll rest awhile child. My guess is that we have less than a mile to go." Ellen set the lantern down and the weary travellers attempted to get comfortable sitting on the rail. ...read more.

Come on boy!" The dog raced up the path leading to the track and the two nearly collided with him as they stepped down on the familiar trail to home. "Ellen, is that you?" Kate's heart filled with joy as her father's voice rang out of the darkness. "Yes Scott. I'm sorry we're so late. I'm afraid I walked a bit fast for this child. She's worn out." Scott picked up his daughter and carried her rest of the way home. Once inside of the cabin, Ellen helped Kate undress and gently tucked her in bed. The comforting sounds of her parents' voices drifted from the kitchen. Even the snores of her brothers in the back made her smile and be thankful that she and her mother were safe and sound. Before closing her eyes, her mother's voice rang in her ears. "Scott, I heard the steps. I didn't want to frighten the child. I kept singing and swinging the lantern around and telling her there was nothing to be afraid of. But Scott, just before we got off the tracks, I turned the lantern around one last time. That's when I saw what was following us. I saw the figure of a man. A man without a head!" Josh Holt-Flusk ...read more.