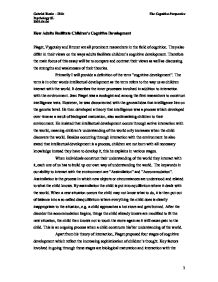 How Adults Facilitate Children's Cognitive Development Piaget, Vygotsky and Bruner are all prominent researchers in the field of cognition. They also differ in their views on the ways adults facilitate children's cognitive development. Therefore the main focus of this essay will be to compare and contrast their views as well as discussing the strengths and weaknesses of their theories. Primarily I will provide a definition of the term "cognitive development". The term is in other words intellectual development as the term refers to the way us as children interact with the world. It describes the inner processes involved in addition to interaction with the environment. Jean Piaget was a zoologist and among the first researchers to construct intelligence tests. However, he was discontented with the general idea that intelligence lies on the genetic level. He then developed a theory that intelligence was a process which developed over time as a result of biological maturation, also acclimatizing children to their environment. He insisted that intellectual development occurs through active interaction with the world, meaning children's understanding of the world only increases when the child discovers the world. Besides occurring through interaction with the environment he also stated that intellectual development is a process, children are not born with all necessary knowledge instead they have to develop it, this he explains in various stages. ...read more.

First of all the infant responds to the world though its actions but the society gives meaning to those actions by social interaction. Cognitive development occurs when the child internalises these meanings provided by society. Perhaps the first advance is language itself as young children lack the ability of reasoning. When language becomes internalised it congregates with thought, they become one compared to earlier in the life of the infant when speech is just w way of communication. Vygotsky said: "thought becomes verbal and speech rational", meaning language provides us the ability to reflect on our thoughts as well as directing and controlling them. Eventually language splits between the above mentioned functions as children develop an inner voice for thinking and reasoning and an articulate way of speech for communication also used to convey our thoughts. As we internalise language, we increase our ability to solve problems. As previously explained Vygotsky stated that cognitive development is achieved by a dual construction of knowledge between the infant and society. He also stated that children's potential intellectual ability increases if working together with another person, an expert. This is how the "zone of proximal development"(ZPD) is defined. The ZPD defines immature functions which are in the process of maturation but are currently in an early stage. ...read more.

He agreed with Piaget that it occurs through interaction with the world but he also took into account how knowledge was represented and organised, he therefore proposed different modes of representation. Bruner also emphasized how important social factors are in cognitive development in children, especially language and social interaction. He specifically pointed out that education and social interaction was a crucial part of cognition. Unlike Piaget who had a view on language as being a mere tool in understanding symbolic cognitive structures Bruner believed that language is a symbolic logical operational thought, these are inseparable. Therefore to further increase and speed up cognitive development language training is important. This is ignored and rejected by Piaget since he believed that cognitive structures could only be developed though individual maturation and interaction. Unlike Piaget who looked upon the adult/teacher as merely a facilitator for individual maturation, Bruner believed that the adult should constantly intervene and aid the child. Instructing the child is according to him an important part of the learning process. In Conclusion, the three above mentioned theories have their specific strengths and weaknesses. Perhaps by combing these theories, by using the strengths of each one, the role of adults as facilitators in children's cognitive development could become more apparent. Gabriel Iliesiu - IB1b The Cognitive Perspective Psychology SL 2003-04-06 1 ...read more.