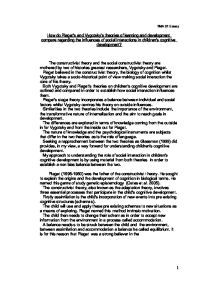 How do Piaget's and Vygotsky's theories of learning and development compare regarding the influences of social interactions in children's cognitive development?

TMA 01 Essay How do Piaget's and Vygotsky's theories of learning and development compare regarding the influences of social interactions in children's cognitive development? The constructivist theory and the social constructivist theory are mothered by two of histories greatest researchers, Vygotsky and Piaget. Piaget believed in the constructivist theory, the biology of cognition whilst Vygotsky takes a socio-historical point of view making social interaction the core of his theory. Both Vygotsky and Piaget's theories on children's cognitive development are outlined and compared in order to establish how social interaction influences them. Piaget's stage theory incorporates a balance between individual and social factors whilst Vygotsky centres his theory on outside influences. Similarities in the two theories include the importance of the environment, the transformative nature of internalisation and the aim to reach goals in development. The differences are explored in terms of knowledge coming from the outside in for Vygotsky and from the inside out for Piaget. The nature of knowledge and the psychological instruments are subjects that differ in the two theories as is the role of language. Seeking a rapprochement between the two theories as Glassman (1999) ...read more.

Looking at the key factors in both the constructivist and social constructivist theory they are not as far opposites as they may initially seem. Both place importance on social factors and the environment. Vygotsky is easy to apply this similarity to as social and environmental factors are central to his theory. However Piaget is often misunderstood with regards to this. It is important to categorise his statements in function with what viewpoint he was speaking from. As an epistemologist he attempted to explain not how the child develops but how knowledge develops. When speaking from a psychologist viewpoint, which is what should be focused on, Piaget gave due respect to the role of social and cultural factors in cognitive development (Stern, 1990). Extract of his early work sound very much like Vygotsky, "social life is a necessary condition for the development of logic" (p.120), "the progress of reason is due to social mechanism" (Piaget 1928/1995, p199). A similarity both theorists share is that the process of internalisation is not a mere replication of material from the environment but a transformative process (Driscoll, 1994). ...read more.

Vygotsky who centred his theory on social aspects believed that knowledge came from the outside and not an innate factor as Piaget believed it to be. The interaction with adults was crucial for cultural tools to be passed through and hence permit development. The child's cognitive development was, in the social constructivist view, the result of social interaction. Whilst Piaget did not disregard the importance of the environment he placed much of the responsibility for learning and developing on the individual itself. Knowledge came from the inside. He supported this by his universal theory of stages where assimilation, intrinsic motivation and accommodation became more complex as the stages were accomplished. The stage theory was challenged by many and rejected by Vygotsky. He theorised that leaning was progressive, and in contrast to Piaget, believed that development could be accelerated through instruction (Flanagan, 1999). As stated earlier Piaget rarely spoke from a psychologist point of view and therefore perhaps Piaget and Vygotsky are not as opposite as they are thought to be. They may both be attempting to resolve the same matter but from different points of view. Thus I believe the natural laws of intellectual development integrated with the impact of social processes and culture may give a highly productive account of the role of social interaction in children's cognitive development. ...read more.