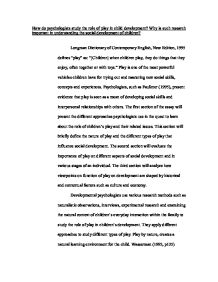 How do psychologists study the role of play in child development? Why is such research important in understanding the social development of children?

How do psychologists study the role of play in child development? Why is such research important in understanding the social development of children? Longman Dictionary of Contemporary English, New Edition, 1995 defines "play" as: "[Children] when children play, they do things that they enjoy, often together or with toys." Play is one of the most powerful vehicles children have for trying out and mastering new social skills, concepts and experiences. Psychologists, such as Faulkner (1995), present evidence that play is seen as a mean of developing social skills and interpersonal relationships with others. The first section of the essay will present the different approaches psychologists use in the quest to learn about the role of children's play and their related issues. This section will briefly define the nature of play and the different types of play that influence social development. The second section will evaluate the importance of play on different aspects of social development and in various stages of an individual. The third section will analyze how viewpoints on function of play on development are shaped by historical and contextual factors such as culture and economy. Developmental psychologists use various research methods such as naturalistic observations, interviews, experimental research and examining the natural context of children's everyday interaction within the family to study the role of play in children's development. They apply different approaches to study different types of play. Play by nature, creates a natural learning environment for the child. Wasserman (1992, p135) describes five benefits of play: children are able to create something new, take risks, avoid the fear of failure, be self-directed and actively engage their mind and body. ...read more.

Children as early as 3 years old can be socially competent when they engaged in socio-dramatic joint play with their elder siblings. Older siblings directed the younger ones in pretend play episodes and gave them instructions on what to say and behave and through many play sessions, these young children understood that they were taking on a different identity during the play sessions. By looking at the everyday interactions of the child within the family, it shows that within certain circumstances, some children are involved in joint play as early as 18 months and this approach provides more insights into some of the processes that underlie the child's social development. Studies such as Connolly and Doyle show that there is a lot of individual variation between children of the same age. An explanation due to this lies in the fact that social experience of any child is unique to that child. Different parenting styles and family experiences are not uniform across children. Another method to study the role of play is the use of experimental research. Experimental researchers take care to create an environment in which they can make causal statements. They manipulate variables, randomly assign participants to various conditions, and seek to control other influences that could affect their research. Paul Harris used this method with pre-school and school-aged children to assist him in understanding the role of play. Here, he asked children to interpret the emotional experiences of a variety of story characters. He concluded that pretend play serves as a powerful function in the development of social perspective-taking skills of a child. ...read more.

Many changes in childhood that have occurred in recent years are undermining the quality of children's play. "Playtime" is being shortchanged in schools such in Japan and US as more emphasis is placed on teaching "the basics" at younger age. Today's children are busy in academic pursuit that the culture of neighbourhood kids playing after school is becoming a thing of the past. When children have time to play, they often choose to watch television, an average four hours a day. The kinds of toys that are multi-purpose and unstructured such as blocks that encourage play has changed recently with toys that promote highly-structured play such as action figures or video games linked to movies or TV programmes. The worrisome impact is the promotion of violence as children imitate violent characters found in most popular shows such as Mighty Morphin Power Rangers and Star Wars (http://familyeducation.com). In conclusion, psychologists adopt a combination of methods to study the role of play in a child's development. Play is seen to be an important agent in a child's social development. Different types of play promote different aspects of social development such as social competence, achievement of sense of self and social perspective-taking skills. However, play is not the single causal factor that promotes a child's social development. Family relationships and the discourse that occurs between carers and children do influence social development of a child. One example is the impact of divorce between parents made the child's social interactions with others immature and ineffective (Hetherington et al., 1970). Peer culture plays significant impact on adolescent's social development. Recent changes in toys and changing views of childhood which focus shifts on academic pursuits show the change in the role of play in children's social development across different cultures and regions. ( 2498 words) ...read more.