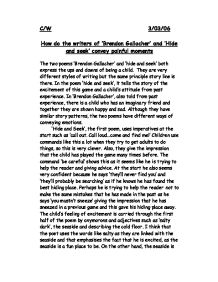 C/W 3/03/06 How do the writers of 'Brendon Gallacher' and 'Hide and seek' convey painful moments The two poems 'Brendon Gallacher' and 'hide and seek' both express the ups and downs of being a child. They are very different styles of writing but the same principle story line is there. In the poem 'hide and seek', it tells the story of the excitement of this game and a child's attitude from past experience. In 'Brendon Gallacher', also told from past experience, there is a child who has an imaginary friend and together they are shown happy and sad. Although they have similar story patterns, the two poems have different ways of conveying emotions. 'Hide and Seek', the first poem, uses imperatives at the start such as 'call out. Call loud...come and find me!' Children use commands like this a lot when they try to get adults to do things, so this is very clever. Also, they give the impression that the child has played the game many times before. ...read more.

This way I believe that it seems more real as the child doesn't know what is going to happen next, whereas if it were written in the past tense, he would know what would happen and I think that some of the tension would be lost. Another factor that emphasises apprehension is the seekers. The poet uses words such as 'prowling' which mirrors 'hide and seek' in the wild; like a prowling tiger hunting it's prey. The other verbs used describing the seekers are 'stumbles, mutters, and whispering'. This conveys that the child is confused and can't make out what they are saying from his hiding place. At the very end, he says 'I've won!' feeling very proud of himself and he steps outside to find them but they aren't there. This is a very sudden anti-climax from the extreme excitement before. As he is outside all alone, the poet uses personification of things around him, such as 'the bushes hold their breath; the darkening garden watches' to emphasise the fact that he is alone and that everything around him seems alive, to make up for no one being around. ...read more.

As the poem draws to a close, she says 'then one day after we'd been friends for two years, one day...'. I think that the repetition of one day narrows down the time frame from two years of friendship down to just one day. Then she says 'when it was pouring and I was indoors' showing that she is not happy with him and out side. Then, when her mum finally says 'didn't you say your Brendon Gallacher lived at 24 Novar?...There are no Gallachers at 24 Novar' Brendon dies. As the girl has got a little bit older, her mum thinks she shouldn't have an imaginary friend any more. As the girl sees that no one else has faith she comes to the realisation that he doesn't exist. So he disappears, or dies to the girl. She can see him lying on her floor. 'Oh Brendon' -a sigh of letting go perhaps. In these two poems two sad moments are shown. In 'hide and seek', the feeling of rejection as the seekers go off and then leave the child alone, and in 'Brendon Gallacher' when Brendon dies and leaves the girl alone. ...read more.