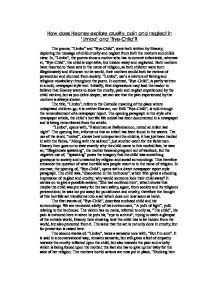 How does Heaney explore cruelty, pain and neglect in 'Limbo' and 'Bye-Child'?

How does Heaney explore cruelty, pain and neglect in 'Limbo' and 'Bye-Child'? The poems, "Limbo" and "Bye-Child", were both written by Heaney, depicting the message of child cruelty and neglect from both the mothers and childs view. In, "Limbo", the poems show a mother who has to commit infanticide, whereas in, "Bye-Child", the child is kept alive, but hidden away and neglected. Both mothers have resorted to these acts in the name of religion, as both children were born illegitimately and if known to the world, their mothers would both be victims of persecution and shunned from society. "Limbo", use's a mixture of fishing and religious vocabulary throughout the poem. In contrast, "Bye-Child", is partly written in a cold, newspaper style text. Initially, first impressions may lead the reader to believe that Heaney wants to show the cruelty, pain and neglect experienced by the child victims, but as you delve deeper, we can see that the pain experienced by the mothers is always shown. The title, "Limbo", refers to the Catholic meaning of the place where unbaptized children go; it is neither Heaven, nor Hell. "Bye-Child", is told through the rememberment of a newspaper report. The opening paragraph in the style of a newspaper article, the child's horrific life ordeal has been documented in a newspaper and is being remembered from the article. ...read more.

The neglect is again shown in, "Bye-Child", the child being now given an inhuman name, "Little Henhouse Boy", a title given to the child from the newspapers. The child is then described physically and mentally. He is, "Sharp-faced as new moons". A sense of emotional sympathy is put in here. "Sharp-faced", meaning he is intelligent, he has been able to stay hidden for all those years, but he knows no better. His world consists of staying hidden, nothing else. His gaunt physical appearance, "... As new moons", the child has seen only darkness, no sunlight. Therefore, his appearance has become pale, no colour in his face. It can also be said that his paleness can be compared to a spiritual ghost, that he is so pale, white, just like a ghost, he is invisible and non-existent. He has a, "frail shape", due to the fact that he has suffered to years of neglect and proper nourishment, resulting in him being weak. The idea that society has no care for child of abuse and in these situations is shown in, "Bye-Child", "Remembered, your photo still, glimpses... on the floor of my mind". The poet is struggling to remember the photo of the child from the newspaper article, members of societies views are shown here, as they just, "glimpse" through newspapers, and then it is forgotten. ...read more.

A religious list of three is used, "Vigils, solitudes, fasts", to emphasize the fact that the mother has to pay penance for her crimes. The child is, "Unchristened", similarly to, "Limbo"; the child will also go to Limbo when he dies. The suggestion of the cruelty of religion is shown in, "Bye-Child", when Heaney states, "A puzzled love of the light". The literal meaning of the mother's silhouette coming towards her son, but also a metaphorical sense is brought in. The, "Light", represents religion. The, "Puzzled", state represents the confusion of why religion is forcing the mother to prison her child. Finally, "Limbo", concludes with an absence of emotion when stating, "A cold glitter of souls", a deathly image, the child has died and been put to rest. Heaney clearly states his message in the last two lines, "Even Christ's palms, unhealed, smart and cannot fish there". The constant reference to the fish vocabulary is known now. Christ himself was known as the, "fisher of men". Such brutal acts are done in the name of Christ, He never wanted such acts to be performed under his name, but still such things go on today in Christ's name, things which Christ would not want. "Bye-Child", concludes with the child described as a, "remote mime", he is so distant and hidden from society, he cannot speak out against the neglect he is experiencing. ...read more.