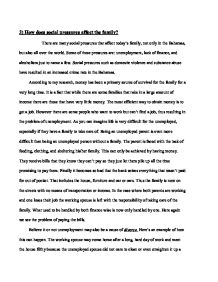 How does social pressures affect the family?

3) How does social pressures affect the family? There are many social pressures that affect today's family, not only in the Bahamas, but also all over the world. Some of these pressures are: unemployment, lack of finance, and alcoholism just to name a few. Social pressures such as domestic violence and substance abuse have resulted in an increased crime rate in the Bahamas. According to my research, money has been a primary source of survival for the family for a very long time. It is a fact that while there are some families that rake in a large amount of income there are those that have very little money. The most efficient way to obtain money is to get a job. However there are some people who want to work but can't find a job, thus resulting in the problem of unemployment. As you can imagine life is very difficult for the unemployed, especially if they have a family to take care of. Being an unemployed parent is even more difficult than being an unemployed person without a family. ...read more.

After working so hard meeting the house in this state may easily anger the working spouse. Words exchanged between both spouses concerning this matter may lead to a fierce argument. Arguments like these can then force either spouse to file for a divorce. A social pressure can also take the form of Domestic Violence also known as spousal abuse. This is simply emotionally or physically harmful acts between people in an intimate relationship. Abuse between intimate partners can be physical, psychological, sexual and economical. Spousal abuse affects every member of the family. If the spouse that is being abused is abused physically they may obtain injuries so bad that it becomes virtually impossible to work without protesting in pain. Spousal abuse also affects the family financially seeing that more money would have to be used on medical bills than usual. The victim of spousal abuse may fall into a deep state of depression. So deep that all he/she can think about is death and committing suicide to escape the pain. ...read more.

Thus the children are afraid to even come home or speak to that parent. Eventually after the children are abused so many times they may feel a need to put some alcohol in their system to deal with the situation and here we see a pattern begin to form. An alcoholic child is just as bad as an alcoholic adult maybe even worse. Being so young they may have more unbelievable ideas then the adult. They may come up with things to do which they think is fun but in truth can prove to be fatal. The parent of this alcoholic has to deal with the shame and violent acts that are committed by the child. He/she will want to spend as much time helping the child as possible. This could cause the other siblings to feel neglected and unloved and they too can fall into a great depression. Every family member is faced with a social pressure at one point in time, but it is up to them as an individual to decide whether they would let the pressure affect them positively or negatively. If the family goes through the phase and comes out unharmed they will most likely become a stronger family. ...read more.