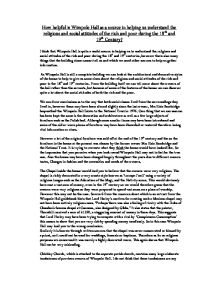 How helpful is Wimpole Hall as a source in helping us understand the religious and social attitudes of the rich and poor during the 18th and 19th Century?

Examples of this are the folly, the gardens, a man-made lake, the Chinese Bridge, the yellow drawing room, statues, and fashions in architecture and interior decoration. This shows how hugely rich they are in comparison to the servants who have only sparse sleeping quarters. The difference in their lifestyles becomes very apparent when you compare sources 1 and 6. Source 1 is a table of jobs and wages of servants in the 1790's and source 6 is from a Wimpole Hall guidebook talking about the chapel. From source 1 we can see that the cook, Thomas Wood (who was the best-paid and most important servant) earned about �55 a year. Sarah Brookes the Housemaid (one of the lesser servants) was paid just eight pounds a year. At this time the owner- Lord Harley was prepared to pay �1350 for the decoration of the chapel. This really illustrates the social divide, when one man can afford to pay �1350 for decoration and another has only eight pounds a year on which to survive. The folly, which is part of the Wimpole Estate, is another demonstration of how hugely rich the owners were. They invested in this grand piece of architecture just for fun. It is a great example of conspicuous consumption. For the rich and wealthy, their' reputation was extremely important. It was therefore essential to make a good impression to your guests. This may be why there is a 'hidden door' in the red room. I think that it is for two reasons: firstly the new classical style of architecture and decoration needed balance and symmetry, so it would look odd and unsightly to have a door at one end of the room and not at the other. But secondly and more importantly this red door was the servant's secret entrance. This implies that the owners of the house do not want the servants to be noticed, so much so that they have tried to hide them from view. ...read more.

They did not respect them, thank them or care for them except for their basic necessities. They were embarrassed by their presence as they tried to hide them by using hidden doors. The servants would have had to obey their masters otherwise they would have been dismissed. Therefore they treated them with courtesy and politeness, as this would have been expected of them. There is one last problem when trying to discover religious and social attitudes; that is, that what may be true for Wimpole Hall is not necessarily true for the rest of England. We cannot tell by looking at Wimpole Hall what religious and social attitudes were like in big cities like London. We need to learn about wider society not just people living in stately homes. In conclusion I think that Wimpole Hall is important in helping us to reveal some clues about the religious and social attitudes of the rich and poor during the 18th and 19th centuries yet there are still many things that it does not tell us. In order to gain a fuller picture of religious and social attitudes we need to use written and picture sources as well as video recreations and other stately homes. Wimpole Hall as a building can only tell us a certain amount- we have to look beyond the walls to gain extra details. But I feel that the house would give the general public a far better idea of what stately homes used to be like if it had some interactive features. For instance first person interpreters could be used throughout the home dressed in period costumes doing activities appropriate of the time, this would be far more informative than guides mechanically repeating their rehearsed speeches. If people could go into the kitchens and see the servants going about their everyday tasks using equipment and methods suitable of the time they would not only take the images in but they would understand the home far better than if they read it from a guidebook. ...read more.