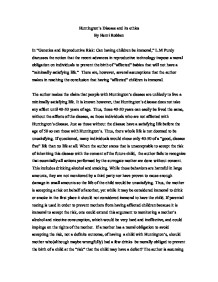 Huntington's Disease and its ethics

Huntington's Disease and its ethics By Henri Robben In "Genetics and Reproductive Risk: Can having children be immoral," L.M Purdy discusses the notion that the recent advances in reproductive technology impose a moral obligation on individuals to prevent the birth of "affected" babies that will not have a "minimally satisfying life." There are, however, several assumptions that the author makes in reaching the conclusion that having "affected" children is immoral. The author makes the claim that people with Huntington's disease are unlikely to live a minimally satisfying life. It is known however, that Huntington's disease does not take any affect until 40-50 years of age. Thus, those 40-50 years can easily be lived the same, without the affects of the disease, as those individuals who are not affected with Huntington's disease. Just as those without the disease have a satisfying life before the age of 50 so can those with Huntington's. ...read more.

If a mother has a moral obligation to avoid accepting the risk, not a definite outcome, of having a child with Huntington's, should mother who(although maybe wrongfully) had a few drinks be morally obliged to prevent the birth of a child at the "risk" that the child may have a defect? The author is assuming that it is immoral to accept the risk because the birth results in a "terrible" disease. Again, how can we be sure that result is terrible if 30-50 years of life are unaffected? Although, the child is unable to "consent" (because they do not exist) the author assumes that child wouldn't consent. Also if a mother who has the disease feels that her life has been satisfying thus far she should not be morally obliges to prevent the birth a of a child who could enjoy the same fate as her. While the author is correct in the assumptions that the risks and possible affects of Huntington's disease are notably greater than that of drinking or smoking, she assumes that this line can easily be drawn. ...read more.

Thus preventing the birth of children that could potentially have Huntington's disease is personally moral issue that depends upon the values of the individual parents at risk, not on the beliefs of society. If society imposed a law that it was immoral to have children if you are extremely poor because u can not provide for them and the child's life wont be satisfying, one could argue that with a little time the mother could move out of poverty and thus have a "good" life, or that the child may find life satisfying without much beyond basic necessities. The author claims that mandatory testing will be beneficial because it can help produce healthy children, yet assumes that all pregnant women at risk will get tested. If testing becomes mandatory many woman who avoid testing, either out of the fear of knowing if they have the disease or that they will pressured into terminating the pregnancy, many woman may avoid prenatal care all together, thus imposing more health risks on the fetus and the mother. ...read more.