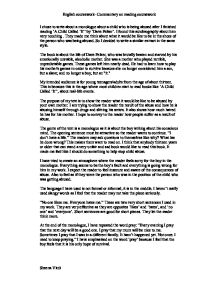 I chose to write about a monologue about a child who is being abused after I finished reading 'A Child Called 'It'' by 'Dave Pelzer'.

I chose to write about a monologue about a child who is being abused after I finished reading 'A Child Called 'It'' by 'Dave Pelzer'. I found this autobiography about him very touching . They made me think about what it would be like to be in the shoes of the person who was being abused. So I decided to write a similar extract in the same style. The book is about the life of Dave Pelzer, who was brutally beaten and starved by his emotionally unstable, alcoholic mother. She was a mother who played terrible, unpredictable games. These games left him nearly dead. He had to learn how to play his mother's games in order to survive because she no longer considered him a son, but a slave; and no longer a boy, but an "it." My intended audience is for young teenagers/adults from the age of about thirteen. ...read more.

The language I have used is not formal or informal, it is in the middle. I haven't really used slangy words as I feel that the reader may not take the piece seriously. "No one likes me. Everyone hates me." These are two very short sentences I used in my work. They are very effective as they are opposites 'likes' and 'hates', and 'no one' and 'everyone'. Short sentences are good for short pieces. They let the reader think more. At the end of the monologue, I have repeated the word pray: "Every evening I pray that the next day will be a good one. I pray that my mum will be nice to me. Sometimes I pray that I was in a different family. It hasn't happened yet. Not once. I need to keep praying." I have emphasized on the word 'pray' because I feel that the boy feels that it is his only hope of survival. ...read more.

Is that understood?", and if he doesn't listen to her he gets punished. My monologue is similar as the boy feels that he is getting punished for his life. "My mum keeps telling me to wash the dishes or clean the floor and if I don't do it properly I know what will happen." I took advice from people in my intended audience who read my monologue. I changed some of the text by adding more detail to it. An example of this is where it says "Besides, I don't want anyone to know what goes on in our house whether it is good or bad." I then added after it had been trialled: "It was a secret between my mum and me. No one else was to know. The attitudes and values of the text is to show what the consequences of abusing is and how it could turn someone's life around forever, even if it was stopped. English coursework- Commentary on reading coursework Sheena Virdi ...read more.