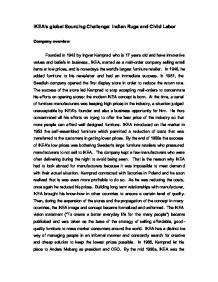 IKEA's global Sourcing Challenge: Indian Rugs and Child Labor Company overview Founded in 1943 by Ingvar Kamprad who is 17 years old and have innovative values and beliefs in business, IKEA, started as a mail-order company selling small items at low prices, and is nowadays the world's largest furniture retailer. In 1948, he added furniture to his newsletter and had an immediate success. In 1951, the Swedish company opened the first display store in order to reduce the return rate. The success of the store led Kamprad to stop accepting mail-orders to concentrate his efforts on opening stores: the modern IKEA concept is born. At the time, a cartel of furniture manufacturers was keeping high prices in the industry, a situation judged unacceptable by IKEA's founder and also a business opportunity for him. He thus concentrated all his efforts on trying to offer the best price of the industry so that more people can afford well designed furniture. IKEA introduced on the market in 1953 the self-assembled furniture which permitted a reduction of costs that was transferred to the customers in getting lower prices. ...read more.

In the carpet industry, to encourage firms to resolve the problem, the Rugmark Foundation is in charge of the supervision and the development of a label certifying that a carpet has been made without the use of child labor. This foundation expected to begin exporting the socially conscious carpets in 1995 and invited IKEA to sign up with them to help to solve the problem in India. The implications for IKEA in this debate are that, in the decisions taken, the company has to considerate the impact on brand and image. Furthermore, on the financial side of the problem, the company has to take onto account that the competitiveness compared to the competitors has to be maintained because up to now, IKEA's strategy is based on offering a well-designed product at an affordable price for the majority of people. Alternatives Ikea faces a few alternatives in order to solve this problem. They could first try to deal with the child labor problem trough its relationships with his suppliers or let Rugmark in charge of monitoring child labor on its behalf. Since the problem is really deeply embedded in the culture of those countries, they could also withdraw form the rug market to ...read more.

The option to do nothing is possible in all situations. The positive aspects of letting the situation exactly as it is right now are that it would not engage any costs and would not require any efforts. On the other hand, in that particular situation, doing nothing has an impact of children that are forced to work at really young age, often in dangerous working conditions. Moreover, Ikea would be involved in that kind of scandals repeatedly and would lose more and more customers and profits because people do not want to buy from company that encourages child labor. Recommendation The best option for Ikea would be to let Rugmark monitoring the use of child labor on its behalf. This option allows more expertise for intervention against child labor and avoids Ikea to engage capital in a field within which they are not really competent. Rugmark responds to the need of Ikea to certify its customers that the rugs they are selling are entirely made without using child labor. It also allows Ikea to get involve in social issues and cooperate with human rights organizations in order to improve its company image after those scandals. ...read more.