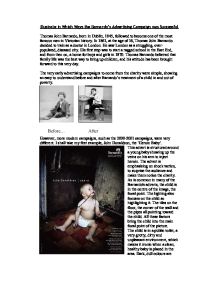 Illustrate in Which Ways the Barnardo's Advertising Campaign was Successful

Illustrate in Which Ways the Barnardo's Advertising Campaign was Successful Thomas John Barnardo, born in Dublin, 1845, followed to become one of the most famous men in Victorian history. In 1861, at the age of 16, Thomas John Barnardo decided to train as a doctor in London. He saw London as a struggling, over-populated, diseased city. His first step was to start a ragged school in the East End, and from then on, a home for boys and girls in 1870. Thomas Barnardo believed that family life was the best way to bring up children, and his attitude has been brought forward to this very day. The very early advertising campaigns to come from the charity were simple, showing an easy to understand before and after Barnardo's treatment of a child in and out of poverty. However, more modern campaigns, such as the 2000-2001 campaigns, were very different. I shall take my first example, John Donaldson, the 'Heroin Baby'. ...read more.

Looking more closely at the photo, you can see that this image represents the child's life, with a lady in a pram below, and the school below. Again, like with the heroin baby, many objects within the photo are pointing toward the child. The apartment blocks, the railing he is standing on and the roads below. Creating this effect means the photo is taken at a funny angle, an angle which enhances the effect of him leaning over the edge. The leaning effect means the audience want to stop him, particularly women and maternal instincts, want to reach out and stop the child from falling. Another irony is the playground below; the ring which is meant for playing on is a sort of target, a landing zone for Martin, creating a shock effect without any explanation. Looking even closer at the child, you can clearly see the sandal of the child sinking into the railing, a problem which could easily have been solved by computer imaging and enhancement. ...read more.

Again upside down we are no instinctively focusing on the eyes, and so has less impact. Yet subtly relates back to the first campaign, with the spoon in the heroin baby, the first advert I analysed. If the baby were to be the other way round, like so, the audience would concentrate on the eyes, and not the spoon or the text, making the spoon less significant, so defeating the object. The lighting is warm, optimistic and is taken with a soft focus lens, whereas as most of the others in the campaign, like the photo on the right are taken under industrial lighting on a hospital bed. This baby is clearly distressed; however the spoon baby is calm and relaxed, bringing the audience into a false sense of security. This campaign was pulled from our viewing after just two weeks and two adverts. This was because the photos were simply too much, too shocking and shocked the viewer into complaining. However, both campaigns were successful, and throughout the years, the campaigns have become more and more successful, yet more and more shocking. George Collins September 2003 ...read more.