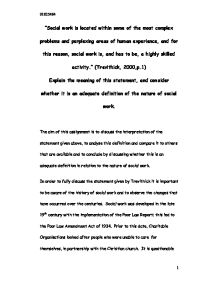 "Social work is located within some of the most complex problems and perplexing areas of human experience, and for this reason, social work is, and has to be, a highly skilled activity." (Trevithick, 2000,p.1) Explain the meaning of this statement, and consider whether it is an adequate definition of the nature of social work. The aim of this assignment is to discuss the interpretation of the statement given above, to analyse this definition and compare it to others that are available and to conclude by discussing whether this is an adequate definition in relation to the nature of social work. In order to fully discuss the statement given by Trevithick it is important to be aware of the history of social work and to observe the changes that have occurred over the centuries. Social work was developed in the late 19th century with the implementation of the Poor Law Report; this led to the Poor Law Amendment Act of 1934. Prior to this date, Charitable Organisations looked after people who were unable to care for themselves, in partnership with the Christian church. It is questionable whether these organisations offered help and support to people in need, or whether they just hid away societies most vulnerable people to take the problem away from the public eye. In a similar way to the 19th century, social work in the 21st century offers support and guidance to vulnerable people. ...read more.

Communication is a skill in itself and it is central to the role of social work (Thompson, 2000). Communication can come in many different forms; this can include verbal, non-verbal, listening and writing skills. When practicing, social workers need to ensure that they are talking in a way that can be understood by the service user, ensuring that the service user understands what is being said. Non-verbal communication or 'body language' is also an essential skill that social workers should be aware of, the ability to read a person's body language is of utmost importance as it is often an indicator of a person's frame of mind or emotional state. Body language is a method of communication that is not usually done consciously, for example, if a service user has their arms crossed in an interview they may not realise it but they are putting a barrier up between themselves and the person they are talking to. The social worker also needs to be aware of the non-verbal signals or 'body language' that they are giving off to the service user. An example of this would be, if they were giving off signals that they are not interested then this could effect the interaction of the service user. If either of these examples occurs they could prohibit effective communication. Thompson (2000) defines communication as "a complex issue, due to the number of skills required to communicate effectively and appropriately". ...read more.

Utilising theories of human behaviour and social systems, social work intervenes at the points where people interact with their environments. Principles of human rights and social justice are fundamental to social work". In conclusion it could be argued that the statement provided by Trevithick (2000) is an adequate definition of the nature of social work, as it informs the reader that social work requires a huge amount of skill and knowledge to be able to deal with the needs of individuals. However, Banks (2001) states that, "social work has always been a difficult occupation to define because it has embraced work in a number of different sectors". Because social work covers such a diverse range of the population and uses such a wide variety of methods this will make it problematic to construct a brief definition that covers all areas involved, as it also has to portray the complexity that is involved with the profession on a day to day basis. This may be why there is such a diverse range of definitions available in relation to the nature of social work. Social work is a profession that changes constantly because there is a great deal of continuous learning involved. Ideas and perspectives change all the time and although the implementation of the new degree will ensure that all social workers deliver a service to as high a standard as possible this is only achievable because of the change in standards put in place by the General Social Care Council. Word Count - 1851 ?? ?? ?? ?? 01825484 1 ...read more.