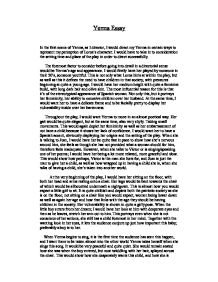 In the first scene of Yerma, as I director, I would direct my Yerma in certain ways to represent my perception of Lorca's character. I would have to take in to consideration the setting

Yerma Essay In the first scene of Yerma, as I director, I would direct my Yerma in certain ways to represent my perception of Lorca's character. I would have to take in to consideration the setting time and place of the play in order to direct successfully. The foremost factor to consider before going into detail in a directorial sense would be Yerma's age and appearance. I would firstly have her played by someone in their 20's, someone youthful. This is not only what Lorca hints at within the play, but as well as this it defines the need to have children in that society, with pressures beginning at quite a young age. I would have her medium height with quite a feminine build, with long dark hair and olive skin. The most influential reason for this is that it's of the stereotypical appearance of Spanish woman. Not only this, but it portrays her femininity, her ability to conceive children over her husband. At the same time, I would want her to have a delicate frame and to be facially pretty to display her vulnerability inside over her barrenness. Throughout the play, I would want Yerma to move in an almost poetical way. Her gait would be quite elegant, but at the same time, also very shyly. ...read more.

This is a very maternal line, in that milk is mother milk. It's almost as though she replaces her child for Juan and wants to care for him how she would for her unborn son. This creates the atmosphere of just how important it is to have a child in the Spanish village in the 1930's. When Yerma begins to talk of her husbands thinness, on the line 'But look at your face now!' I would have her stroke his chin and look deeply into his eyes. This firstly is quite patronising, again talking as though he is her child so it would be important to stress this with the stroking movement. As well as this, the actual dialogue suggests Juan is not himself manly enough to bare children. She wants him to become stronger, in hopes to conceive a child. This depicts her complete desperate need, or hunger for a child and perhaps her sheer embarrassment of not yet have a child after Twenty four months, she wants to blame someone else. On the line 'Every year...Just the two...year,' I would have Yerma turn away from Juan and walk into the centre of the stage, looking bewildered and almost hypnotic. She would lower her arms from her chest and hold her belly. ...read more.

The entire time she is talking to Maria, there would be a look in her eyes of both envy and jealousy. She is thrilled because of her maternal instincts, but at the same time, Maria has something she deeply desires and cannot have. To depict this I would have her constantly stroking Maria's face and rubbing her belly and face in complete awe and admiration. Now it is Maria who is the closest thing to her child. The nearest thing for her to cradle. Therefore it is almost as though she is now smothering Maria. However at the same time, she is now idolising and looking up to Maria ,therefore when she begins to ask Maria what it is like, she pulls herself back and distances herself slightly, in the revelation it is not her baby and reminds her how she in her own mind is not feminine or womanly enough to be cradling. She has ambivalent feelings of both joy and jealousy. I would have Yerma being quite straight forward and constantly asking questions in detail. Her pitch would be quite low to depict her jealousy because it is in contrast to her nervous high pitch voice. As well as it being manlier, this is how she perceives herself in not having a child. The constant inquisitiveness displays her desperation. ...read more.