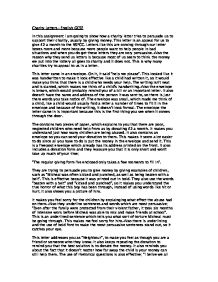 In this assignment I am going to show how a charity letter tries to persuade us to support their charity, usually by giving money.

Charity Letters - English GCSE In this assignment I am going to show how a charity letter tries to persuade us to support their charity, usually by giving money. This letter is an appeal for us to give �2 a month to the NSPCC. Letters like this are coming through our letter boxes more and more because more people want to help people in bad situations and when you do get these letters they are very persuasive. Also the reason why they send us letters is because most of us seem to think the money we put into the lottery all goes to charity and it does not. This is why many charities try to appeal to us in a letter. This letter came in an envelope. On it, it said "help me please". This looked like it was handwritten to make it look effective like a child had written it, so it would make you think that there is a child who needs your help. ...read more.

It also contains an envelope so you can send your donation to them. This makes it seem a lot easier to do since all you have to do is put the money in the envelope and send it. This is a freepost envelope which already has its address printed on the front. It also includes a donation form and they reassure you that it is only short and won't take up much of your time; "The regular giving form I've enclosed only takes a few moments to fill in". They are trying to persuade you to give money by giving examples of children, such as "Micheal was often kicked and punched, as well as being beaten with a belt". This is effective because it was printed out in bold. They also use the words "beaten with a belt" and "kicked and punched", so it makes you understand the true horror of what this boy has been through, instead of using words like hit or hurt. ...read more.

The use of rhetorical questions is also effective; "I belive we all have a responsibilty towards them. Do you agree?" This makes me feel guilty because you might not of put much thought into it before you read this letter. The NSPCC sign is the only bit of colour on the letter which is green. This could represent a traffic light, since green means go, so it could be their way of saying go for it! My opinion of this letter is it is very successfull. It makes me feel aolls orts of emotions as I read it. The skills they have used to persuade me are very beliveable and make me feel guilty and sad at the same time. It makes me really want to stop their suffering. I think this letter would really appeal to the people who may have been through the same thing as they have. Even if people haven't been through the same thing, this letter gives a really good idea of it. ...read more.