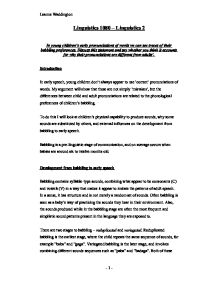 In young children's early pronunciations of words we can see traces of their babbling preferences. Discuss this statement and say whether you think it accounts for why their pronunciations are different from adults'.

Linguistics 1080 - Linguistics 2 In young children's early pronunciations of words we can see traces of their babbling preferences. Discuss this statement and say whether you think it accounts for why their pronunciations are different from adults'. Introduction In early speech, young children don't always appear to use 'correct' pronunciations of words. My argument will show that these are not simply 'mistakes', but the differences between child and adult pronunciations are related to the phonological preferences of children's babbling. To do this I will look at children's physical capability to produce sounds, why some sounds are substituted by others, and external influences on the development from babbling to early speech. Babbling is a pre-linguistic stage of communication, and on average occurs when babies are around six to twelve months old. Development from babbling to early speech Babbling contains syllable-type sounds, combining what appear to be consonants (C) and vowels (V) in a way that makes it appear to imitate the patterns of adult speech. In a sense, it has structure and is not merely a random set of sounds. Often babbling is seen as a baby's way of practicing the sounds they hear in their environment. Also, the sounds produced while in the babbling stage are often the most frequent and simplistic sound patterns present in the language they are exposed to. ...read more.

Also, in the word 'blue' (adult target /???:/), the consonant cluster /??/ is simplified by adding a vowel to produce /????:/. This shows that early speech is related to babbling preference because by adding the extra vowel, the child is converting the C-C-V-V pattern of 'blue' to the pattern they favoured in babbling (C-V-C-V). The issue of complexity of sound production greatly influences the way in which first words are pronounced. Children delete whole unstressed syllables to make words less complicated to pronounce. For example, they may pronounce 'tomato' (adult target /????:???/) as /??:???/ by deleting the unstressed syllable /???/. The meaning is not lost, as it is the stressed syllable that contains the most meaning. It is also easier for children to produce vowels because they are a free flow of air through the mouth, with no involvement of any articulators as there is in the pronunciation of consonants. This is particularly important because, even in early speech, children do not have full muscular control and co-ordination to enable them to use the correct pronunciations. The Jean Aitchison view that "Comprehension outstrips performance" is illustrated using an example from Berko & Brown (1960) where a child refers to a plastic fish as 'fis'. When asked several times by an observer 'Is this your fis?' ...read more.

For example, very often children will use stops where fricatives would be present in the adult target. E.g. 'zebra' would be replaced by 'debra' - the fricative /?/ is replaced by the stop /?/. This is reflected in babbling because around 90% of the sounds produced are stops, compared to 10% fricatives. It is much easier for the child to produce stop sounds as less effort is needed - they involve only a simple short burst of air. Conclusion It is obvious that early pronunciation is influenced by the child's babbling preferences to some extent. This is the case because babbling allows the child to practice sounds and master them. Without this, they surely would not be able to speak at all. The fact that the differences between adults and child's pronunciation of words reflects the type of sounds used in babbling strongly suggests that early pronunciation does show some indication of babbling preferences. However, taking into consideration the other factors discussed - such as the fact that deaf children also babble, I have come to the conclusion that there may be a continuous development from babbling through to adult speech. I believe that babbling is the start of the child's speech development - every child has this innate ability. I also think that the extent of how well the child develops language depends on their acoustic-articulatory system and other external factors. ...read more.